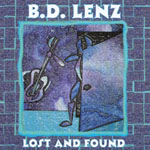 His solos, however, are fluid and interesting; his tone is clean and full-bodied. And his band is on the money. Geoff Mattoon contributes strong tenor and soprano sax work throughout. Keyboardist Daniel Mintseris, electric bassist James Rosocha, and drummer Tom Cottone are the other core players. Making guest appearances are acoustic bassist Ron Velosky, drummers Brendan Buckley and Greg Federico, and percussionist Joe Mekler. Some of the highlights include Rosocha's bass solo on "Lazy Bones," Lenz's ferocious solo on "Grandma Rosocha," and the 5/4 riffs of "Primitive.