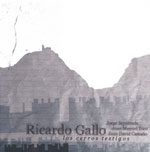 Living in New York City, one can sometimes take the presence of so much local musicianship and creativity for granted. Ricardo Gallo's Los Cerros Testigos is, therefore, a strong reminder that great music is happening all over the world. Here we have another example of what a fusion of different music with jazz really means: the creation of something new that no longer belongs to its original world (Colombia) and yet still maintains some of its recognizable characteristics (rhythms and folk song feel), while being truly jazz-like in its daring, unpredictability and spirit.

From the first notes of "El Trasnochado," this new world is upon us. Drummer Jorge Sepulveda and bassist Juan Manuel Toro form a single pulsing rhythm section, with added percussion by Juan David Castano. Although it is sometimes hard to pull the individual rhythms apart, Sepulveda has the energy and polyrhythmic feel of Elvin Jones, while Toro fits his bouncing lines within the drummers' beats. Above this bubbling cauldron Gallo flies, sometimes playing straight, square phrases, other times playing against the rhythm, attacking with odd and dissonant harmonies and jumping out from the folk origins of the song. An alternate take at the end of the disc shows how loose the band's arrangements can be, and how much they listen to and trust each other.

The title tune changes mood entirely, starting out with a pastoral introduction that leads to a Chopinesque melody where unexpected notes are exposed and then resolved in a very jazzy way, still somehow maintaining an audible connection to the folk music of Colombia. The dark, pulsing rhythm of "La Distritofobia" could be straight from the streets of Bogotá and clashes wildy with the dissonance of Gallo's piano in the most exciting way.

"Chontaduro Free-to" is perhaps the biggest surprise. This nearly eleven-minute free jazz improvisational journey is as far from folk music as one can be, and yet the marimbas and percussion, when combined with the piano, produce a verdant feel. The piece is anything but chaotic, relying on a sense of forward movement and development as the players explore sounds and textures.

The joy of making music and the freedom of jazz infuse every note here. It's wonderful to hear how jazz enables Gallo and his band to express both who they are now and where they came from. Los Cerros Testigos, a terrific record from beginning to end, will be on my short list for the best of 2006.