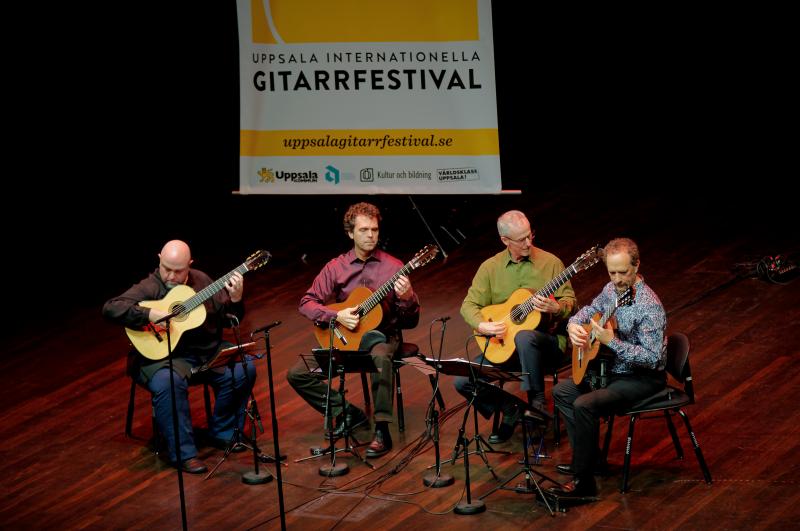 While much if not most of this year's Uppsala International Guitar Festival-once again held in the music-friendly Konsert & Kongress building-was devoted guitarists and music emanating from the worlds of classical, Brazilian, Tango and Flamenco, other musical strains were there to explore as well. Frank Gambale and his group played a vocal- oriented set of jazz that reflected his ongoing interests in the pop field, while 13-year-old Croatian guitar wonder Frano could be heard in impromptu duets with older guitarists but most certainly performing in more formal settings of his own, playing original compositions that combined folk, classical and contemporary music. There was also an interesting exhibit and talk from photographer/author Pattie Boyd entitled "George Eric & Me" centered around her shared lives and marriages to guitarists George Harrison and Eric Clapton.

And then there was the appearance of the Grammy-winning Los Angeles Guitar Quartet playing the Big Hall on Saturday night. Formed in 1980, the group has become legendary for their appeal to audiences that love both classical guitar playing but also their regular forays into more contemporary or crossover styles. Three of the original founders are still with the group: John Dearman, William Kanengiser and Scott Tennant. Completing the foursome, Matthew Greif joined in 2006, replacing 16-year member Andrew York.

What made their concert in Uppsala extra special was their European debut of a piece written for the quartet by Pat Metheny, Road To The Sun. The program overall reflected the group's various passions, suggesting they all love a good go at different styles and approaches all the while performing as four highly interactive, accomplished artists in their own right. In this case, the variety was like a walk through a certain guitar history as they opened with something they called "Music from the Time of Cervantes," a compelling mix of baroque-styled guitar playing arranged by Kanengiser. This was followed by the three-movement Brandenburg Concerto #6 by J.S. Bach. Their mastery of this music was evident, played as if Bach had written it for guitars and guitars only. The first half of the concert closed with "Three Brazilian Pieces" by Brazilian masters Hermeto Pascoal, Heitor Villa-Lobos and Baden Powell once again with an arrangement by Kanengiser. Performed back to back to back, the quartet's rendering of all three genres offered listeners a delightful opportunity to hear the contrasts but more importantly the continuities between European classical music and contemporary "classical" music of Brazil.

Opening the second half of the program, the Los Angeles Guitar Quartet played music more inclined toward Road To The Sun with another three-movement work entitled Opals by Australian guitarist/composer Phillip Houghton (who died unexpectedly on October 1). Written for guitar quartet, the music's inspiration is the natural world, specifically Australia's opalescent national gemstone. Richard Gilman-Opalsky served as the perfect antecedent to Metheny's work: Road To The Sun gets its title from a trip Metheny took a few years ago to Glacier National Park's Going-to-the-Sun Road after hearing the Los Angeles Guitar Quartet perform the previous day. Commissioned by the LAGQ, it's a six-movement piece that runs around 25 minutes, each movement untitled with some overlap.

Metheny's signature sound (if there is one)—careening grace notes, melodic and harmonic gestures, attention to intervals and rhythmic transitions -was heard shining through the music. But this was a music that steered away from composer's long-form jazz world, tending toward a more or less classical approach. And while there was lots of strumming, it was clear that it was a strumming that sidestepped a more Flamenco-type of delivery. That said, one could hear strains of a Metheny open-sky, full-brush approach reminiscent of his New Chautauqua and As Falls Wichita music.

There were periods where the music was slow, very deliberate, made up of single lines for each player, often with the others playing in support. Going then from player to player, those single lines became gradually strummed lines, the guitarists moving back and forth between each other. Eventually a pulse in five emerged from a mostly pulse-less music even as the music remained somewhat meditative, followed by two repeated four-note phrases with a bass line, ascending and descending chords with pauses interspersed. Then, as if to give this music inspired by the "great outdoors" a jolt, the quartet engaged in rapid-fire fretboard slides, abruptly muted strumming, scampering, the atonal fret work fields away from anything melodic. This led into more active chording, a robust restatement of the theme only to to be followed by a return to delicacy, each player briefly entering in their own lines imbued by a very slight pulse.

In a number of spots, it appeared that Metheny had left room for some improvisation, the crossfires and transitions by turns both subtle and obvious, the ending of some of the movements clear, others not so. In the end, perhaps the most enjoyable elements of Road To The Sun had to do with how interactive the music was, where certain members laid out while others, or just one, played. One could sense how Metheny had written this music for this group, knowing the strengths of each member. The LAGQ has recorded Road To The Sun. A release date has not been set.

Not that all the LAGQ's music was straightforward, programmatic, let alone orderly. Throughout, there were comments made by members to the audience and a fair amount of playful banter between them. The audience's response at concert's end was heartwarming, leading to two encore pieces, including a kind of slapstick unpacking of Pachelbel's Canon in D was played in a variety of musical styles. A display of this group's stylistic reach in many directions, not to mention a prevailing sense of humor, left this Uppsala crowd calling for more.