Lorraine Feather: The Girl With the Lazy Eye 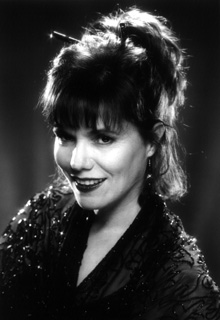 When Lorraine Feather has written lyrics for a Fats Waller or Duke Ellington tune, the musical foundation was there for her, a structure on which to build. But when she writes the lyrics first, then hands the piece over to a musical collaborator, the lyrics are the rhythmic foundation. Does she hear music when she writes the lyrics? Is there a metrical or harmonic structure that is a kind of rudimentary composition?

"That's a good question. I don't remember having been asked it before, or quite that way. In the case of an up-tempo tune I usually have either a template, something I listen to or think of when writing the lyrics, or just a rhythm. With 'A Lot to Remember' it was Charlie Christian's 'Waiting for Benny,' but as Eddie and I worked through it, the character changed a lot from the vibe of the Christian tune. The talking thing at the beginning just came to me off the top of my head. With 'How Did We End Up Here?' it was a rumba groove my husband Tony recorded at home, but in the studio, it seemed to want to go a different way and that's part of the fun of making an album. Gregg Field once helped me out by recording a dozen grooves."

And when she first gives a set of lyrics to Russell Ferrante or Eddie Arkin or Shelly Berg, how would that conversation go? Each is already aware of her vocal range, what she is comfortable with and what she likes. How much "instruction" does she give them?

"We work through it in person for the most part. If something is going to an awkward place for me vocally I let them know and they finesse the melody one way or the other. It's pretty organic."

But her composer/collaborators must at some point move beyond parameters and just compose music. On of the most memorable melodies on Ages was written in the middle of the night, with no input at all from Feather, by a jet-lagged Russell Ferrante. The composition, which is reminiscent of Scott Joplin or James P. Johnson, took Feather by surprise. What does she tell a collaborator in advance, and what doesn't she tell him?

"I might tell them how I envision the track starting or ask what they think of such-and-such idea or mood. If a verse seems too long or short or a line does, I adapt. A song takes on a life of its own. That experience with Russ was kind of an eye-opener. It made me realize that sometimes I should just shut up."

Who are some of the lyricists who have inspired her along the way?

"Stephen Sondheim is literally without peer and always inspiring. Johnny Mercer, of course. There are certain songs by certain writers that I think of all the time, particular lines in them especially. Joni Mitchell in 'Down to You': 'Old friends seem indifferent/You must have brought that on'; Suzanne Vega's 'Ironbound/Fancy Poultry': 'Backs are cheap and wings are nearly free.' Prince has written some killer lines that I thought were so funny in a camp way."

What about Feather's own lyrics? She is quite candid about her opinions of her music, and freely critiques it for anyone who can take it. What does she truly like of her own work?

" 'Antarctica' from Such Sweet Thunder. I really was pleased with [the line] 'I cried all night/That's half a year.' 'We Appreciate Your Patience,' which I wrote with Shelly Berg, for Language; 'How Did We End Up Here?' and 'The Girl with the Lazy Eye' from Ages, with Eddie Arkin and Russell Ferrante, respectively.

"I can't divorce the lyrics from the music, and there are some songs that I feel are most wedded to the music my co-writers created. Or there might be some odd line or phrase that was fun to sing and took more practice than usual, like 'Connecticut prep school' [from the song, 'Scrabble']."

'I Always Had a Thing for You' is a simple tune that is a paean to emotional honesty. What about the emotional release a writer feels from successful lyrical expression?

"It's very satisfying, sometimes upsetting along the way of course. There are some songs I couldn't sing through without crying the first dozen or so times, or I'd have to dig my fingernails into my hand in the studio. I also enjoy cracking myself up, or my co-writers.

"I definitely feel most balanced when I've been writing, whether the song is about me strictly speaking, or not."

How Did We End Up Here?

A few years ago Lorraine Feather, her husband Tony and their dogs Sterling and Brava moved from the San Francisco Bay area to the San Juan Islands, there to float in the idyllic Strait of Juan de Fuca between Washington State's Olympic Peninsula and Vancouver Island. The answer to the question she poses in her tune "How Did We End Up Here?" sounds rhetorical if the best you've ever seen is Martha's Vineyard or Long Island, but when you've seen these islands, the answer is easy: "How Could You Live Anywhere Else?" It is one of the most beautiful places in North America.

True, there are no Jewish delicatessens, no nightclubs, not even cab service. Having no garbage disposal or trash pickup is a bitch ("We go to the Solid Waste Disposal place twice a month to throw our trash bags into the communal reeking pile," she says). On the other hand, there's the panoramic view of the Pacific Ocean and the deer who show up for a breakfast graze on your lawn in the mornings. 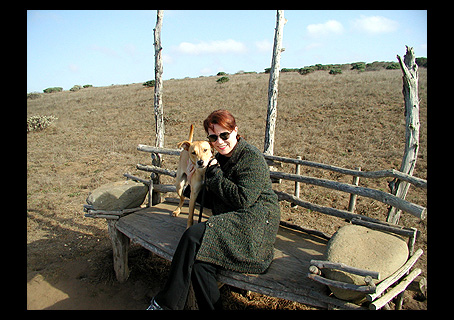 To make a record date in L.A., you have to be willing to endure a full day of traveling, including a slow ferry ride or lurching flight on a puddle-jumper to SEA/TAC. And once in the Big Orange, you have to listen tolerantly to the incredulous taunts of people who can't believe you don't even have pizza delivery.

But life is sometimes better seen from an acute angle.

Are Feather's intellectual approach and precision of language a barrier to her as a recording artist? Is the problem that there is a small audience, or is it, as with much of jazz, just a matter of getting record companies to give it enough exposure through aggressive marketing?

"There is a small audience all right. It's difficult for a singer-songwriter in jazz, too, unless you have that aggressive marketing behind you, but I love doing it and I don't care. In my case, my albums have also been a calling card for me as a writer and led to my being hired as a lyricist on different occasions. And hey, you never know when a song will be licensed for something. Hmm, I wonder if a studio ever made that movie of the book Word Freak (Heartbreak, Triumph, Genius, and Obsession in the World of Competitive Scrabble Players). . .?"