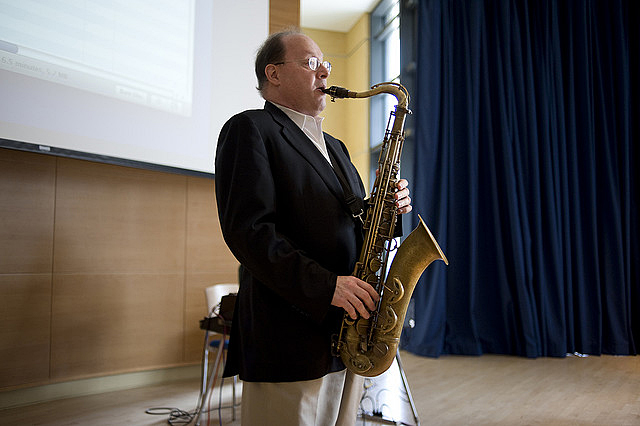 I remember very distinctly what it was like playing the clarinet part and Benny Goodman playing the lead, and it was very exciting.

Saxophonist, band-leader and writer Loren Schoenberg, now Executive Director of the National Jazz Museum in Harlem, spent an interesting childhood and teenager-hood growing up in New Jersey in the 1970s, meeting and befriending both Teddy Wilson and Hank Jones, and ultimately becoming employed by Wilson's famous '30s boss, Benny Goodman. Schoenberg was first an assistant to Goodman and then Goodman's manager, and, as a tenor saxophonist, formed the big band that Goodman was eventually to lead himself for a year until his death in 1986.

Schoenberg is also a jazz and classical music historian, a two-time Grammy winner for his historical essays accompanying box set releases from Louis Armstrong and Woody Herman. In addition to essays published in reference books such as the Oxford Companion To Jazz, he is also the author of The NPR Curious Listener's Guide to Jazz, published by Penguin Books in 2002 with a forward by Wynton Marsalis.

Big recent news for the Museum was the discovery and acquisition of the Savory Collection, a treasure trove of live recordings of the leading figures of swing made by jazz fan and Harvard drop-out Bill Savory. The recordings were made from 1935-41 on special "long playing" sixteen inch aluminum and vinyl discs, discs that could hold thirty minutes of music a side. Savory worked for a radio transcriptions company, and was able to use the equipment after hours for his hobby: jazz. The recordings were from the radio broadcasts of afterhours jams, and the quality of many of them is excellent. Performers featured include Lester Young, Goodman, Roy Eldridge and Billie Holiday, all in artistically nurturing and relaxed environments. One stellar example is Coleman Hawkins reprising a version of his historic take on "Body And Soul" in a Times Square club in 1940—a version that is twice the length of the recorded version but just as intense. Savory also recorded classical broadcasts by such immortal figures as the conductor Arturo Toscanini, which may be as revelatory as those with the jazz masters.

There are a total of 975 discs in the collection, and Schoenberg personally went to look at them in the Spring of 2010, when they turned up through the agency of Savory's son Gene. In September and November, 2010, the weekly series of classes that the Museum holds for the public, called Jazz For The Curious Listener, featured playings from the collection. Schoenberg has much to say on the significance of Savory's efforts, including the recordings' potential for influencing future musicians of all kinds. He is also keen to speak about his time with Goodman, the tremendous innovations of all the great soloists of the first decades of jazz, and the cross-fertilization between jazz and classical music.

All About Jazz: You must have discovered some great 78s.

Loren Schoenberg: I remember once I went out with my friend Phil Schaap [broadcaster at New York's WKCR] back in the '70s and found a twelve inch that was done for Philo with Lester Young, Nat "King" Cole and Red Callender, and at this time it was only available on LP in very bad sound quality. (Well), not bad sound quality but not good sound quality. And I found this lovely 78 twelve inch album. It said ""Lester Young"—it couldn't say Nat Cole 'cause I guess he was under contract to another company, but it was the Lester Young Trio. This is not the session with Buddy Rich in '45. This was the trio session with Red Callender in '42. So we brought them home, and then sat on them! I sat on the records by mistake. So that's my 78 collecting story. I found another copy later.

AAJ: As a child in New Jersey, you went to a lot of local venues, where you met Teddy Wilson and through him, in due course, Benny Goodman.

LS: Yes. when I was about 13, 14 Teddy Wilson was playing in a restaurant near where I lived. And I just couldn't believe that this was the same guy who had been playing with Benny Goodman.

AAJ: What was the venue?

LS: It was called the Colonial Post, in Hackensack, New Jersey. It was a very small little restaurant in Hackensack and Teddy Wilson was playing there on Saturday or Sunday afternoons, weekend afternoons, at 5 to 8 (p.m.), or something like that. I said, "This can't be the guy who I have on these records with Benny Goodman." So I asked my parents to take me. And they did, and it was him.

AAJ: Were there any other places you went to? 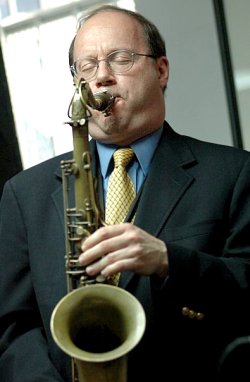 LS: Yes, we went to a place called The Cookery in New York, which was owned by Barney Josephson. Barney Josephson is the same guy who had the Cafe Society uptown and downtown in the '40s. So Teddy played at The Cookery, and because one night [that] he was playing at the Cookery—I went there with my parents—he was [also] playing that [same] night with Benny Goodman, that's how I went to hear Benny Goodman for the very first time, and I met Lionel Hampton and Gene Krupa.

AAJ: When was that?

LS: That was 1972. The Cookery was at [East] 9th Street and University Place [in Greenwich Village]. It was right near where the Knickerbocker is.

LS: Teddy had a tuxedo on and my parents said, "Wow, you're wearing a tux tonight," 'cause usually he didn't wear a tuxedo. He would wear a kind of a brown suit. And so he said, "Yes, I'm playing..." (and he explained that) the National Urban League was giving a humanitarian award that night to Lionel Hampton at the Waldorf. They had the original Benny Goodman Quartet with Slam Stewart—or maybe George Duvivier—and Illinois Jacquet added. And I asked if I could go and he said "Yeah" so I tagged along, and that's when I shook hands with Benny Goodman for the first time.

AAJ: That must have been pretty amazing. How were you so lucky? Did Benny Goodman remember you when you met again?

LS: "Well, I don't think he had that many teenage fans. So he told me I could come up. I called his office to ask if I could have an autographed picture. So I came in and got the picture, and then I met him at the New York Jazz Museum shortly thereafter because they did an exhibit on Benny Goodman and I was a volunteer there. And I got a picture of me and him and it was actually in the local newspaper. So that was the beginning.

AAJ: This was the New York Jazz Museum that was downtown in the '70s.

LS: The Jazz Museum was begun in 1972, by a guy named Jack Bradley. He was a very close friend of Louis Armstrong's. He was like an adopted son. And he, in conjunction with Howard Fischer, started this museum on West 55th Street.

AAJ: Later, there was a Count Basie exhibit there, where Basie played and Charles Mingus sat in on bass.

LS: I recorded that on my little cassette machine. I gave the tape to Phil Schaap. I guess he still has it. [Memo to Mr Schaap: play it!].

AAJ: 78 rpm records can sometimes sound pretty good, relative to LP and digital versions of the same track. Is that something you've noticed?

AAJ: They're large, they have big grooves.

LS: There's a lot of information.

AAJ:: You have recently been holding sessions for the public, playing selections from the historic Savory Collection.

LS: We had [Bill Savory's] son, we had the engineer, and we were talking about exactly what you're talking about. What it still comes down to is, no technology will ever sound better than the source. It can't. Back in the '30s most people at home did not have good equipment. So back in the '30s, a lot of people didn't hear the stuff sound great because their record players weren't great, their speakers weren't great, all that kind of stuff. But at the studio where they recorded this music, [when] they were hearing it back it sounded incredible.

AAJ: To lead a big band is a lot of peoples' dream. How did you get to put that together?

LS: I went to New York in 1976 and I was playing with a lot of mediocre big bands. That was the only place that I could hear big band music. I became dissatisfied because the bands weren't that good and even the charts we were playing were not the originals. They were just copies, so I had this feeling that I really wanted... it's like, if you wanted to hear a Brahms symphony but all you were hearing was a cheesy second-rate version of it, you 'd say 'Man, let's put an orchestra together, get the original symphony, and play it.' Well, it was like that. I wanted to do that with Goodman and Basie and Ellington.

So I put a band together of my friends, just a rehearsal band, and started working and then I started to attract really good musicians to play in it. So once I had Mel Lewis, once I had Harold Ashby, Rolf Ericson, or Johnny Carisi or whoever was in the band, more people wanted to play in it, and it eventually turned into an actual band that was working. Not a lot, but we were working. John Hammond [the famous A&R executive who discovered Basie, Goodman and Bob Dylan] was interested, and [others], people who had some influence. And the next thing you knew, we started doing the Newport Jazz Festival. Then we made a record and Benny heard the record. I was working for him at that time in another capacity and that's how it happened. And that's how we became the last Benny Goodman big band.

Discs from the Savory Collection

AAJ: When you were beginning with your big band, did you have any trouble finding places to play?

LS: Sure we did. Of course we did. We played a noon-time gig at a place called The Red Blazer, which was on 88th and Third Avenue. And I paid the band. I don't remember what it was, but I paid them something. And we worked our way up from there.

AAJ: When did you release your first record?

AAJ: What was the personnel?

LS: "Well it was mostly young guys. It was all my peers, like Howard Alden, Ken Peplowski, Matt Finders and Doug Lawrence and all these good players, but maybe one third of the band or one quarter of the band were the old time great guys, the veterans, like Danny Bank, Mel Lewis or Eddie Bert.