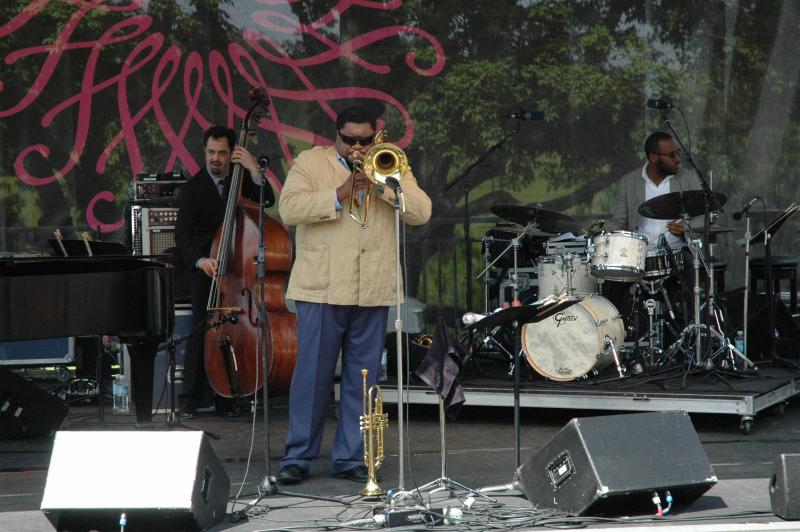 After a night of thunderstorms and tornado warnings, the weather cleared at Longwood Gardens, a horticultural conservancy spread over a wide swath of countryside in Kennett Square, Chester County, PA. The day turned out sunny and mild, perfect for "jazz on a summery day" in late spring. A sold out crowd of over 4,000 fans showed up for the music and wine tasting in a broad expanse of meadow at the edge of the conservancy. They were treated to a delightful mixture of performances that embodied alternately straight-ahead, cool, and New Orleans styles, culminating in the contemporary vocalizing of featured artist Dianne Reeves. Thanks to the tireless efforts and creative intelligence of Longwood's Performing Arts Manager, Tom Warner, this festival has, in a few short seasons, become part of an ongoing year-round concert series in all genres, one of the best of its kind on the East Coast. Jazz fans in particular can look forward to the likes of guitarist Pat Metheny, bassist Christian McBride and others of similar stature during the 2012-2013 concert season.

The shows began at noon with Joe Baione's quintet. The Wilmington, Delaware-based vibraphonist is making it on the international scene with recordings, as well as concert and festival performances. The reason for Baione's evolving success became evident with his lively, articulate, and swinging solos in the Milt Jackson tradition. The set featured original compositions, including the upbeat "Superhero,"a driving version of "The Journey," the African/salsa "The Stranger," and the climactic "Oh Yeah!!" These were interspersed with Len Winchester's "Down Fuzz" and the funky Miles Davis standard, "All Blues." Baione's sidemen backed him up beautifully, with Jorge Castro wielding a spicy tenor sax and flute, pianist Toru Dodo, bassist Yoshi Waki (the number of high power Japanese bassists is exceeding the immigration limits these days), and drummer Willie Martinez. 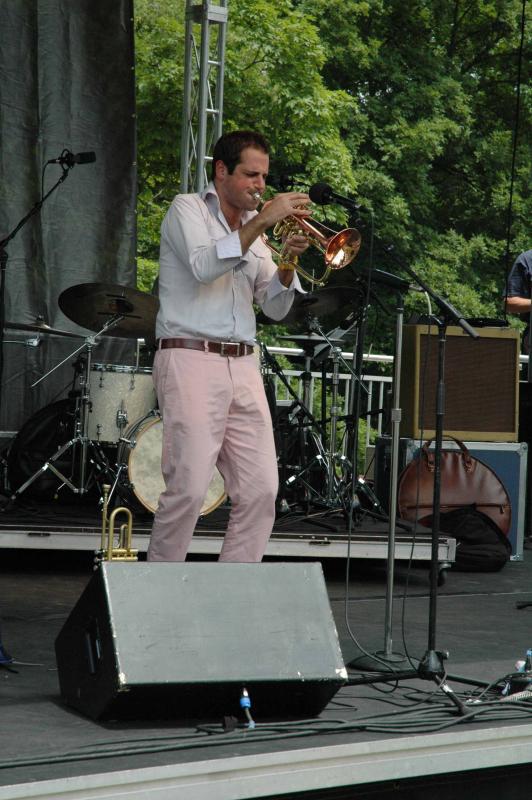 A food, wine, and relaxation break was followed by Dominick Farinacci Quintet. Farinacci is a New York-based trumpet and flugelhorn player with Cleveland roots. He has the stage persona of a laidback urban guy with a slightly Seinfeld sense of humor and an efficient, effective way of playing the horn. His approach in this set was conservative, compared, for example, with other trumpeters like Ralph Alessi and Dave Douglas. His playing resonated with early Miles Davis, with shades of Freddie Hubbard and, on flugelhorn, a touch of Art Farmer.

Farinacci's on-point improvisations merited sustained interest, and he stayed on top of the music from beginning to end. The set, which included the standards "It's All Right with Me," and "What's New," harked back to the cool jazz era. An original blues tune as well as an Eastern European composition, "Erghan Diado," added contemporary variations and flavors. The group, which included bassist Yasushi Nakamura, drummer Marion Felder and percussionist Keita Ogawa, played in a manner that was relaxed yet tight, sophisticated, and on target. Ogawa came across as a Zen master's version of a one-man band, adding a cymbal to the tabla, and dangling some bells on his leg, yet sustaining balance and coordination with Felder's drumming throughout.

Farinacci's pianist, Kris Bowers, manifested a special flair, first noticeable in the Farinacci original, "Tango." His comping and solos were quietly absorbing, as emerging from a source deep within rather than a prearranged plan or structure. Similarities to the work of pianist Horace Silver could be heard over time. Farinacci must have recognized the special talent of this gentleman, because he gave him space for a solo piano version of "Skylark," which he performed with grace, again in a style reminiscent of Silver. It turns out that Bowers won the prestigious 2011 Thelonious Monk Piano Competition—and, for good reason.

Wycliffe Gordon is a top-of-the-line trombonist—possessing equal facility on trumpet and vocals as well—who remains true to his southern roots and the gospel tradition. Switching handily between trumpet, trombone, and vocals, he stayed in a traditional New Orleans mode with a set based on his recent Hello Pops: A Tribute to Louis Armstrong (Criss Cross, 2011). The group began with a medley of Armstrong staples, "Sleepy Time Down South" and "Back Home Again in Indiana," followed by a vocal on "Sunny Side of the Street" with just enough of the Armstrong growl to evoke Satch while remaining respectful.

Next came a Duke Ellington touch, with the standard, "It Don't Mean a Thing (If It Ain't Got That Swing)." For his trombone solo, Gordon quickly inserted a straight mute, on top of which he used a plunger mute, to almost virtuosic effect, leaving even trumpeter Wynton Marsalis and all other plungers in the dust. Oscar Perez contributed excellent piano work à la the Duke. Bassist Neil Caine and drummer Marion Felder (once again) pounded out competent solos as well. This was followed by Gordon's warm tribute to Armstrong, "Hello Pops." 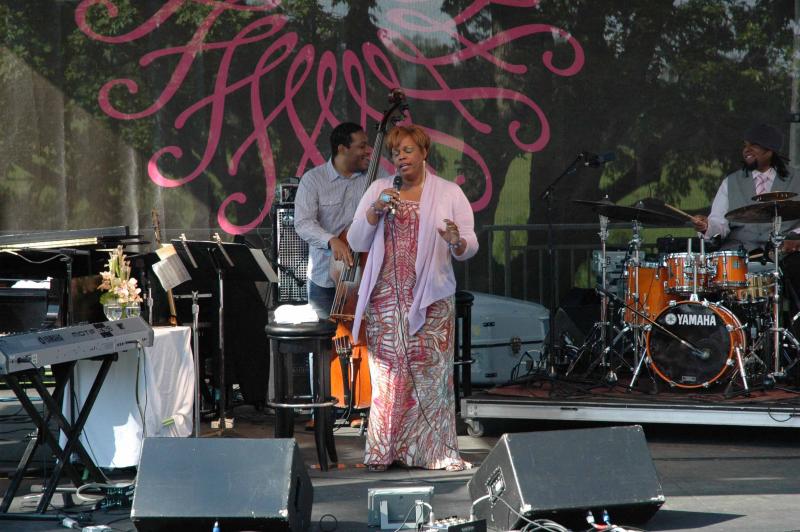 Gordon then interjected a serious note with Armstrong's "Black and Blue," a traditional 4/4 eight-bar blues with psychosocial lyrics lamenting the plight of the African American male trying to maintain a precarious identity in a white man's world. Armstrong, who has sometimes unfortunately been stereotyped as an Uncle Tom by radical Blacks, showed in these lyrics that he was quite conscious of the pain felt by the black man during segregation. Gordon sang the song with great feeling, and hopefully the audience got the message in the middle of the relaxed atmosphere that Gordon otherwise generated.

The set concluded with "Hello Dolly" and "Down by the Riverside," the gospel song that Satch's Hot Five band made its own, Modern jazz has today evolved into a serious, sophisticated art form that stretches in many complex directions, and it was refreshing to hear the good old Southland music that makes the audience snap its fingers and tap its feet, even more so when played by a group that could knock the hell out of any chart put in front of them.

The wonderfully eclectic afternoon culminated in a star performance by Dianne Reeves, one of the premiere jazz vocalists in the world today, a virtuoso and many time Grammy Award-winner with improvisational prowess and brilliant, resilient stylings. As is the custom with many vocalists, her set began with an instrumental by the singer's regular sidemen—pianist Peter Martin, bassist Chris Thomas and drummer Terreon Gully—and featured gifted Brazilian guitarist Romero Lubambo, whose solos added a bossa-samba slice of Rio to the African, Hispanic, and blues-flavored styles that Reeves brought with her.

Reeves then came on the stage, and as soon as she belted out her first lustrous notes, dominated the whole afternoon. Her voice was at its best, and she exuded an enthusiasm comparable to Ella Fitzgerald, whose mixture of entertainment, scat, and straight-ahead jazz Reeves recapitulated throughout. Indeed, she began by improvising some words about the rain and other atmospherics, the same way that Fitzgerald made up her own lyrics for "Mack the Knife" and "The Cricket Song"—the latter concocted at Juan Les Pins as a response to an infestation of insects that noisily took over the concert. It seemed a bit over the top for Reeves to use this Fitzgerald trademark; some things should, perhaps, be left to the originator. Reeves then went a step further, making up nonsense syllables to a number she heard on a Barcelona TV station. It would have honored the song and whoever had been the vocalist had Reeves taken the trouble to learn the Spanish lyrics. Nevertheless, it was all in good fun, and Reeves used her stunning voice to generate a healthy energetic.

Reeves followed up with a beautiful song dedicated to her mother, "Gonna Be a Good Day," then segueing into to the standard, "Stormy Weather," crossing a line between the sultry style demanded by the tune and more than a touch of Roberta Flack, killing us softly with that approach. Reeves then made up for her various attempts to generate fun with a stunning, rapturous version of "Our Love is Here to Stay" that could have rivaled Judy Garland. Lubambo's guitar playing here was superb and added a just right bossa nova style counterpoint to Reeves' glorious rendition. Reeves maintained her solid energy and passion throughout and brought an idyllic day to a grand conclusion.