By WOODROW WILKINS
March 30, 2006
Sign in to view read count 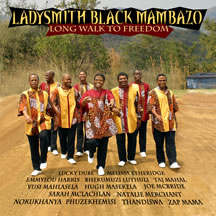 It's fitting that the third track of Ladysmith Black Mambazo's Long Walk to Freedom was co-written by Joseph Shabala, the group's lead singer, founder and musical director, and American pop star Paul Simon. About twenty years ago, Simon introduced this South African group to the pop world on Graceland. With Emmylou Harris providing a Simon-like lead vocal, the group does honor to "Diamonds on the Soles of Her Shoes, which Ladysmith recorded with Simon for Graceland. Joe McBride, referred to as a human jukebox, provides vocal percussive sounds on this track.

Ladysmith Black Mambazo and other South African artists helped spread the message of racial inequality in their homeland after Ladysmith's appearance on Graceland. Eight years later, apartheid came to an end. Long Walk to Freedom serves the dual purpose of celebrating the group's twenty years on the international scene and the more recent birth of democracy in their homeland. The album features twelve new recordings of classic Ladysmith songs, most of them featuring guest vocal performances by a diverse lineup of popular music artists, plus a bonus track.

One of the guests is Sarah McLachlan, who appeared on the Tonight Show with Jay Leno, where she and the group performed "Homeless, another selection from Graceland. Taj Mahal appears on "Mbube, the traditional Zulu version of the song most widely known as "The Lion Sleeps Tonight, also referred to as "Wimoweh. The song was written and originally recorded by South African artist Solomon Linda in the late 1930s. It gained popularity when the US pop group the Weavers recorded it in 1948, followed by the Tokens in 1961. On this recording, Mahal adds a slick blues guitar.

Emmylou Harris joins for "Amazing Grace/Nearer My God to Thee, a tribute to American gospel music, complementing the group as it seamlessly segues from one song to the other and back. Hugh Masekela lends his trumpet to the orchestral vocal magic of "Shosholoza, which features several of South Africa's high-profile vocalists. After the title song, the album ends with "Thula Thula, an improvisational piece which Ladysmith has not previously recorded. This brief track, which features Shabalala without the group's harmonizing backup, provides a delightful closing to an excellent recording.

The enhanced CD includes several additional features, including full-length videos of "Long Walk to Freedom and "Raise Your Spirit Higher, the latter taken from Ladysmith's Grammy-winning album of the same name. On the "biography page, a click on each member's photo delivers a brief audio message from that member. A picture gallery, a screen saver, and a list of Heads Up Africa Series releases, including Ladysmith's On Tip Toe DVD, complete the package.