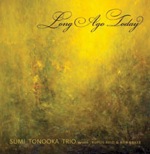 Sumi Tonooka is a pianist from Philadelphia with some impressive credentials: she can recall playing with Philly Joe Jones and has counted upon the services of the redoubtable bassist Rufus Reid on each of her records. More important, she plays with a mature and entirely personal style that makes her a contender for the ranks of today's jazz piano elite.

Long Ago Today is a trio outing that derives a lot of its magnetic appeal from the mysteries of the music within. But there are some mysteries deeper still than those heard in the music here. Namely, why did this remarkably fresh record sit in the can for three and a half years after it was recorded before its March 2008 release? Or, how could someone who plays this well still be flying beneath the radar for so many listeners?

As for the musical mysteries, they are rooted in the record's paradoxical, almost dialectical, resolution of apparently incompatible elements. Tonooka's playing is crisp and precise but at the same time gives the impression of a raw, jagged quality. The songs are bright but somehow also brooding. On Cole Porter's "All of You" (the only number here not penned by Tonooka), the coordination of Rufus Reid's bass and the pianist's left hand is earthy, grounded and funky, but also has the feline grace of Fred Astaire and Ginger Rogers.

Tonooka plays with the ferocious power of Bud Powell at the height of his powers, but also with the generous lyricism of Enrico Pieranunzi. Such a combination turns out to sound a little like Erroll Garner sometimes (there's a bit of that swishy counterpoint on "Dreaming of Tibet"), but mostly Tonooka's playing is entirely her own.

The leader's own compositions are particularly well suited to her style. The harmony in the faster-tempo numbers careens in unexpected directions. Paradoxically (again), this uncertain harmonic foundation provides the pianist with the bedrock for solos of remarkable intelligence and control, boldly played.

Fiery drummer Bob Braye matches Tonooka's kinetic sense of rhythm with great empathy, particularly on the charging "Quantum Question." Sadly, Braye died in 2007. He could scarcely have left a more fitting tribute than his playing on this record.

Be the Dance; All Of You; The Clinging; Dreaming of Tibet; Quantum Question; Long Ago Today; Renewal; Moroccan Daze; Just For Now; Nami's Song.