By GLENN ASTARITA
January 21, 2012
Sign in to view read count 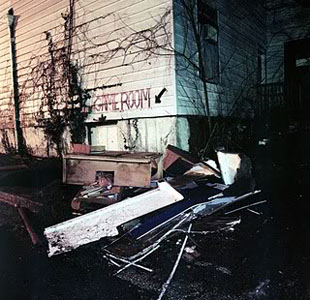 This band with the tongue-twister moniker used to be a three-piece but these days experimental and progressive-rock guitarist Shane Perlowin and drummer Ryan Oslance execute the whole shebang as a duo. With recordings for venerable cutting-edge record labels such as Cuneiform and Tzadik amid self-produced ventures, critics and fans of the band's legacy use the term math-rock as an indicator, largely relating to geometric patterns that are designed with impossibly complex time signatures. In previous times, the musicians moved about with the velocity of a road runner on steroids. Although it must be stated that Ahleuchatistas' methodologies were founded on cogent and mind-altering cadenzas indicating architectures that tendered a warped sense of thematic development. Excitable, invigorating and technically proficient are descriptors that helped define the group's makeup.

Location Location is modeled on guileful rhythmical episodes, where the twosome scales its arsenal into a more concentrated thrust. Perlowin is an inventive guitarist who doesn't simply rummage through super-speed scales and excessive soloing jaunts, conveying innovation along the lines of eminent avant guitarists Henry Kaiser and Keith Rowe.

Perlowin works from a holistic stance via oscillating ostinatos, shadowy voicings, climactic chord clusters and stinging upper register licks. These aspects radiate on the opening "Waterboarding" as lucid imagery of torment within a colossal wall of distorted sounds bear a calamitous soundstage. Oslance counters, prods and pummels rhythms into submission while sustaining a degree of flexibility here and throughout.

Featuring bizarre song forms and reverberating effects, Perlowin churns out a symphony of heavily amplified parts during these interconnecting pieces through overlays and multitasking efforts. He presents an alterable set of perspectives devised on improvisation and structure, but uses restraint during certain movements that are shaped into renegade surf music motifs. The duo also delves into free form expressionism atop components that suggest the liquefying of titanium through the sounds of music on "Channel Zero," while "Israel" resides in the classic prog-rock schema due to the guitarist's streaming leads and Oslance's driving pulses.

Not superfluous or simply framed on a crash-and-burn musical ethic, Ahleuchatistas translates into a mindset that circumvents stereotypes or anything that links to a product-driven formula. Loud, rebellious, and riotously invigorating, the band tears down convention to impart a unique identity and sprawling musical plane, unbound by traditional applications or instilled with acquiescence.