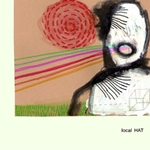 Too much of it might be undesirable but a little psychedelia is good thing. The Catalan-based group simply called HAT offers it up on Local HAT, with its unique blend of modern jazz that touches on everything from abstract, rock, avant-garde, catchy pop-influenced hooks, and whatever else spawns from its richly diverse music environment surrounding Barcelona, Spain.

The group's leaders—guitarist Jordi Matas and keyboardist Sergi Sirvent—have collaborated in various works with forward-thinking momentum, as heard in Matas' Organic Trio on Landscape (2007), and Sirvent's Free Quartet (2005), both on Fresh Sound Records. But when the two formed HAT in 2004 they not only brought their individual experiences to the table, but personified anew the English expression of "wearing different hats." The disparate ideas coalesced into unusual directions on the debut, Hi Ha (Fresh Sound New Talent, 2005), and is even further pronounced in this release.

The first track, "Only now is then" gives a hint into what's in store; a jazzy number with Sirvent's silky keys and smooth crooning lyrics, "You never know what's coming next..." It morphs with ease into "Automatic extern"'s full wildness: a tripped out organ/Fender Rhodes solo, funky rhythmic backbone (provided by bassist Marc Cuevas and drummer Oscar Domènec), and splashes of synth-vocoder lyrics; all before the track's sudden cool-down. Sort of like withdrawal from an illegal substance, but in this case it's a very good trip.

Things take a different turn with "Molaria molaria," a mellifluous display of the group's versatility with lyricism and texture: slide guitar, bowed bass, and Sirvent's impressive multi-instrumentalist duties, now on trumpet. The music is consistently surprising and thoroughly intelligent. The groove-oriented "Perhats" has that Fender Rhodes cool-jazz vibe, whereas "Coincidencies" possesses a rock-anthem mantra and nonchalant swagger, dotted with reverberating keyboards and Matas' edgy fuzz-toned slashing.

The compositions are further enhanced by the intricate inclusion of electronic sampling: the sound of a scribbling pencil in the beginning of "La carta"; an indigenous voice in "Guru"; and the ubiquitous sound of water in "Rain." These musicians are artists, taking creative liberties to further to describe each track. "Guru''s strangeness is balanced by subtle effects, but also by a beautiful change in tempo, where each instrument adds to the canvass.

The set concludes appropriately with the same attitude from which it began. "Money"'s got that sixties acid rock-inverted Pink Floydian attitude, via Matas' metallic guitar shrapnel. But the set closes with a 180 degree turn on "Nana para un difunto"—a poignant ballad, lifted by Sirvent's feathery trumpet and Matas' emotive strings. A wonderful closer to a unique and interesting journey.

Visit HAT on the web.