By EYAL HAREUVENI
September 9, 2009
Sign in to view read count 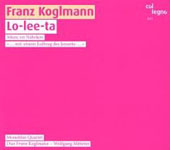 Viennese composer and trumpeter Franz Koglmann is a well-known commuter between the arts and modern chamber jazz. His subtle, sophisticated compositions create a set of mirrors that reflect a distinct artistic mean: literature on Make Believe (Between the Lines, 1999), inspired by Jean Cocteau; poetry on O Moon My Pin-Up (hatOLOGY, 1997), inspired by Ezra Pound and Fear Death By Water (Between the Lines, 2003), dedicated to poetry of T.S. Elliot; cinematic images on Venus In Transit (Between the Lines, 2001), an homage to Marylin Monroe; even classical composers on An Affair with Strauss (Between the Lines, 2000). Through intimate musical articulation—orchestrating images and clever intellectual references into playful and provocative word sonatas—it was inevitable that Koglmann would choose to decipher the challenging linguistic maneuvers of world-famous writer Vladimir Nobokov, known as the master of "chamber music in prose," into a set of musical images.

Koglmann uses the motif in Bob Harris' title theme from director Stanley Kubrick's 1962 screen adaptation of the novel as a recurring motif throughout this elaborate musical tribute. He moves between pieces written for his Monoblue Quartet—featuring longstanding musical partners Tony Coe (reeds), Peter Herbert (bass) and Ed Renshaw (guitar)— that follow the novel's characters and scenes, as well as a series of short "Hereafter" duo pieces with keyboardist Wolfgang Mitterer that are used as sonic analogies to the characters. The interplay between the quartet members is rich and nuanced and, as expected, reflects Koglmann's rich musical vocabulary, referencing everything from early jazz to Third Stream and the avant-garde. The duos with Mitterer charge these pieces with additional abstract subtlety.

That said, Koglmann does not bind himself to Nabokov, dedicating "A Day's Work" to psychoanalyst Michael Turnheim even tough Nabokov was a well-known hater of psychoanalysis. Koglmann dedicates the final tracks to Nabokov's other novels.

This fantastic musical tribute is more than an entertaining and intellectual character quiz for connoisseurs. Using detached irony but still in his passionate manner, Koglmann offers a beautiful, accessible musical portrayal of a great writer.