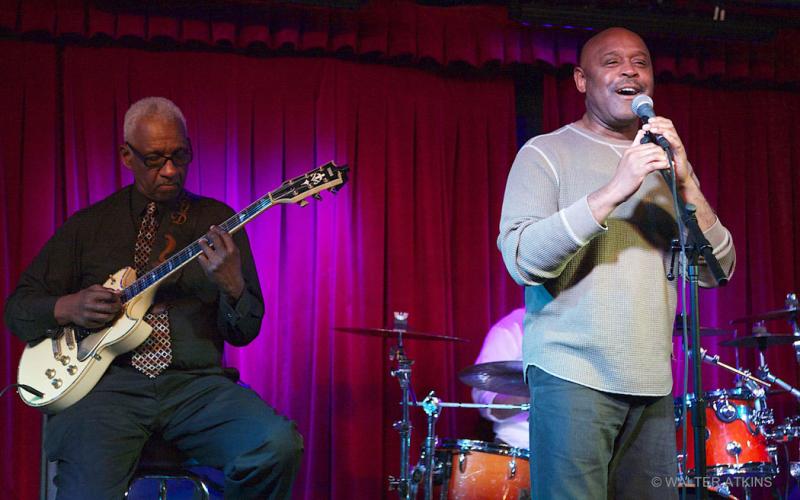 Seeing the SF Bay Area musical stalwarts Gregory and Lindsay performing together was a real holiday bonus. Because of their respective schedules, this pairing was a long time coming.

The holiday audience was presented a festive blend of jazz, soul and R&B to help take the edge off the chilly but exciting December night. The first of two Sunday evening sessions kicked off with Gregory's arrangement of the Ohio Players' 1975 Billboard number one smash, "Sweet Sticky Thing." Driven by Gregory's assertive guitar work, the popular track heated up the house and was well received. Boisterous room responses included, "That's nice," and "Killed it." Gregory commented with a wry smile, "Whoever said 'that's nice' is my new friend."

Another instrumental tune focused on tenor saxophonist Stewart, the son of one of the guitarist's old friends. Gregory and company followed up with the influential saxophonist Eddie Harris' 1968 jazz/soul standard, "Listen Here." The band leader's memorable solo here set the stage for Pearson, whose intense playing on electric piano drew crazy applause and howls of encouragement.

The Sunday gig featured something for everyone. Bassist Thomas presented the R&B composition, "Be My Girl Friend" with a searing, wailing vocal style. This had the Biscuits and Blues supporters clapping and roaring loudly with approval. Later in the show, he also sang vocals on T-Bone Walker's, "T-Bone Shuffle."

Gregory took this time to introduce the individual band members including Pearson, the head of the College of Alameda Music Department and Stewart, who was retiring to pursue religious archaeology in his farewell performance. He and Pearson surprised their band leader with a special arrangement of the Spinners' 1974 hit, "Love Don't Love Nobody." Pearson's long and sultry keyboard introduction accompanied Stewart, singing with a faux Philippe Wynne (the Spinners late lead singer) voice. The holiday revelers sang along while quietly swaying to the music. After the applause died down, Gregory said, "Never seen that before-it's on film." Tonight's show had a videographer recording it.

When Gregory introduced Lindsay, he said, "It took a year to book Tony for tonight." Listeners sitting next to me included Jo, a software developer from New Zealand and another hotel guest from Russia. She was in town for business and staying in the downtown area. When she asked her hotel to recommend a local place with good live music, they suggested Biscuits & Blues.

When I mentioned the vocalist Lindsay had been with Santana for over two decades, she was pleased and familiar with the legendary San Francisco rock Latin band and their music.

Lindsay sang a confident, soulful rendition of the 1970 Van Morrison favorite, "Moondance." For the next number, Aguan wanted to do a Christmas song and Lindsay wanted to sing the Bill Withers's staple, "Use Me." This writer suggested doing both. The motion received a raucous second from the B&B crowd. Lindsay and the timekeeper merrily concurred. They did the Withers track and then a Christmas song with a Lindsay/Aguan duet.

Because the club was a short walk from Union Square, Lindsay asked rhetorically if anyone brought gifts for the band. Gregory's "new friend" responded with "Very Nice." At the end of the set, Gregory calmly suggested for the blithe attendees to, ..."order some drinks. After two or three drinks, the band sounds really good."

Lloyd Gregory and Tony Lindsay definitely helped to make the season a little brighter for folks on this cold December evening. Performing together, the Gregory /Lindsay brand of invigorating live music radiated from the Biscuit & Blues venue, as people filled the nearby shopping epicenter at Union Square.