By GLENN ASTARITA
December 6, 2012
Sign in to view read count 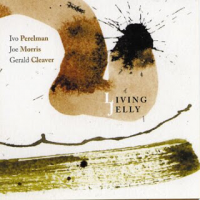 It may take some stamina to keep up with Brazilian avant-garde tenor saxophonist Ivo Perelman, as he often releases several albums in unison. Living Jelly, featuring guitarist Joe Morris and drummer Gerald Cleaver, marks one of three concurrent albums produced for Leo Records. Offering ensemble and stylistic contrasts, Perelman garners the support of pianist Matthew Shipp and drummer Whit Dickey on The Clairvoyant (Leo, 2012), and realigns with Shipp and bassist Michael Bisio on The Gift (Leo, 2012). Three outings that highlight contrasting slants offer additional credence to Perelman's enterprising musical processes. He's a heavyweight champ who, at times, moves mountains via his colossal sound and brusque attack. However, Perelman can also wind it down a few notches when delving into chamber jazz formats or exploring modern mainstream and bop. Indeed, he's a multitasking machine.

The trio opens with the flighty, free-bop "In Pursuit of Pleasure," with Morris and Cleaver setting the pace amid an open forum. The lack of a bassist offers the band additional spatial resonance and the ability to bounce around, invent, and engage in perky, oscillating dialogues. The trio delves into some fun and frolic on the fragmented free-form escapade "Playing with Mercury," where Morris's nimble single note phrasings and punctuated chop chords help generate a zigzagging current. Perelman solos and navigates the upper range, blurting out expressionistic contrapuntal maneuvers with pops, squeaks and finicky expressionism. Often engineered with a layered approach, it's an offering that enables a group sound, uncannily showcasing each musician in great detail to complement its group-centric focus.

"The Sloth" conveys vivid imagery of the earth's slowest moving animal as the saxophonist sports a Ben Webster-like tone and delves into delicate improvisational frameworks with Morris. "Living Jelly" proceeds with an amorphous undertow, energized by Perelman's wide-ranging sonic attack atop Dickey's undulating pulses and the guitarist's shadowy chord voicings.

The trio organizes the free-realm into a purposeful schematic, gushing with radiant tonal shadings, opposing viewpoints and subliminal deviations. Yet it fosters the utmost collaboration, and links a compelling story to its fervently executed, expand and contract type improvisational workouts, often modeled with great depth and capacious modalities.

In Pursuit of Pleasure; Playing with Mercury; The Sloth; Enigma; Living Jelly.