Rarely do the worlds of jazz, classical music, world music and musical theatre come together in one place to hobnob and strut their stuff, but that was exactly what happened at Live!Singapore, an ambitious event organized by Koelnmesse and IMG Artists. Festival directors, producers, agents, managers, executives and artists of these four disciplines came from more than fifty countries, and gathered in Singapore to discuss the respective challenges they face in a rapidly changing world, both technologically and demographically speaking.
The choice of Singapore as the venue was a sign of the growing importance of Asia in the performing arts marketplace. The exchange of ideas and the forging of new partnerships were the principal aims of Live!Singapore, a three-day event which united an extremely impressive array of figures from the performing arts in a series of forums and discussions. An international trade fair and a series of outstanding showcase performances from some of the world's most renowned musicians provided the opportunity for attendees to show off their wares.
Each day had a particular focus, with classical music on day one, musical theatre on day two, and jazz and world music on the final day. The focus was largely, though not exclusively, on the performing arts in Asia, and what emerged strongly from each day were the common themes of the desire to reach a greater audience, the importance of education in generating an appreciation of the arts among the young, the need for partnership and collaboration, and the challenges of promoting Asian artists both at home and abroad.
The three-day extravaganza got under way with a jaw dropping performance from American violinist Joshua Bell. Looking relaxed in a black t-shirt, Bell demonstrated in just fifteen minutes why he is considered to be one of the very finest concert violinists in the world. Even those who are not devotees of classical music were beguiled. Although the differences between the classical, musical theater and jazz and world fields are pronounced in some ways, Zarin Mehta, President and Executive Director of the New York Philharmonic struck a resonating chord when he said in the subsequent panel discussion: "Great music will always find a foothold." In jazz, this has always been the case and is why the music survives, continues to grow and to redefine itself.

The similarities between the status of classical music and jazz, just as much as the differences, were salient in the keynote speeches of Sir Clive Gillinson, Executive and Artistic Director of Carnegie Hall, and Tsung Yeh, Director of the Singapore Chinese Orchestra, and in the fascinating panel discussion which followed. Gillinson's mission at Carnegie is to present "the best of all music" and nobody could accuse Carnegie of having ignored jazz over the years. From Duke Ellington's annual Carnegie concerts in the '40s to Sonny Rollins' concert in '08 to celebrate the fiftieth anniversary of his first appearance there, jazz has played an important part in the legend that is Carnegie. Incidentally, as Warren Allen pointed out in his review of eighty five year-old reedman James Moody's 4B (IPO Recordings, 2010), Carnegie Hall has played host to Moody at least once every single year since '50. 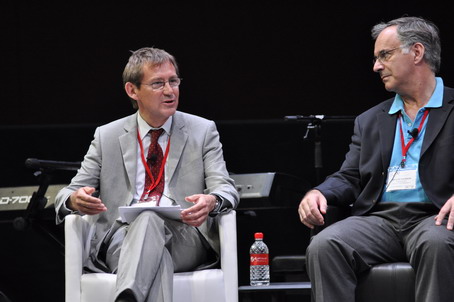 In a captivating and eloquent speech Gillinson spoke of the need to bring classical music back to the people through outreach and education programs. Over $200 million has been spent to update the performance areas in Carnegie Hall, and Gillinson has done an admirable job in bringing in punters who are experiencing Carnegie Hall and possibly classical music for the first time. Jazz, like classical music, has always had a small but cogent market; the two musical forms share the mark of minority music and perhaps elitists ones at that, though jazz has never enjoyed the level of state funding or the profile that classical music has. One notable exception is the Lincoln Center where Wynton Marsalis is doing something analogous to Sir Clive Gillinson at Carnegie The annual Essentially Ellington Competition, for example, sends out six original Duke Ellington charts transcribed by David Berger, with a recording of the pieces performed by the Lincoln Center Jazz Orchestra. The program has been running since ' 94 and has reached nearly a quarter of a million students.

Both Gillinson and Marsalis understand that the future health of classical music and jazz alike lies at grassroots level and through collaboration. "The key" is partnership;" Gillinson said at Live!Singapore, "alone we could never do half of what we do." He went on to stress the importance of "persuading our political masters that education in the arts is important" and sounded a battle cry to make the arts in general central to our lives. Although the Lincoln Center has in recent times given performance space to adventurers like John Zorn and Cecil Taylor, the program has a decidedly traditional, historical outlook and Marsalis, for all the great work he does propagating and preserving America's only indigenous art form, could perhaps learn from Gillinson who pronounced with regard to programming: "It is possible to be challenging and innovative and still appeal to the public."

Gillinson proclaimed in addition that: "so much of the future of classical music is being shaped in Asia." This is not only true from the point of view of the number of wonderful Asian classical musicians emerging on the international scene, but also in terms of Asia as a consumer market. Joyce Chiou, Executive Director of the Philharmonia Taiwan revealed that 65 percent of the classical music audience there is under 35 years of age. Jazz audiences may be a little longer in the tooth, but as day two's "Jazz: Glorious Past, Uncertain Future?" session highlighted, there is also reason for optimism for jazz in Asia.

In the last half dozen years new jazz festivals have sprung up in Thailand (2), Malaysia (3), Indonesia (4), Mongolia, Nepal, Azerbaijan, China, and Korea, where the three-day Jarasum Jazz Festival draws an impressive 150,000 people. There is also a new jazz festival due to start in India in '11. In addition, Australia, which is so closely linked to Asia, has a plethora of vibrant jazz festivals both young and long-established. It may be of interest to Wynton Marsalis that Australia is arguably the greatest preserver of traditional jazz in the world, with the Australian Jazz Convention now in its 65th consecutive year, and with traditional jazz societies dotted around the vast country. However, unlike the classical audience in Taiwan, the traditional jazz audience in Australia and the musicians themselves are all the wrong side of 65, and they too realize, better than most, the necessity to reach out to a younger audience. 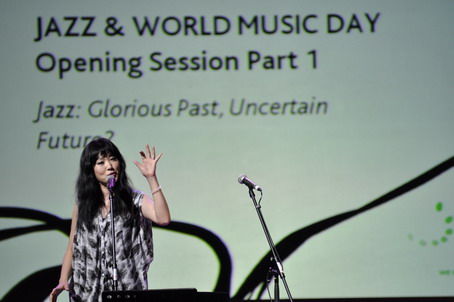 The ability of jazz to transcend time, appeal to all ages and to all cultures was perfectly demonstrated during the showcase performance by Korean singer Youn Sun Nah, which preceded the panel discussion on jazz. Youn Sun Nah's Voyages (ACT, 2009) is one of the finest crossover albums in recent years, and she has collaborated with some of Europe's top jazz musicians including trumpeter Mathias Eick, bassist Lars Danielsson and guitarist Ulf Wakenius. Her fifteen minute slot held the audience totally rapt. Beginning with a bewitching solo version of "My Favorite Things" which sounded like a slightly ethereal lullaby, Nah then revealed the strength, passion and range in her vocals during an electric interpretation of Egberto Gismonti's "Frevo." For this number she was ably accompanied by Singaporean guitarist Munir Alsagoff.

The all-too-short set concluded with a hypnotic version of Nat "King" Cole's "Calypso Blues" with Nah, again solo, looping layer upon layer of vocals to create a totally original and highly impressionistic soundscape. Nah's memorable performance provided the clearest metaphor for the position of jazz in the world today—in front of a highly appreciative but less than packed audience, a Korean singer who didn't know what jazz was fifteen years ago, brought new life to a fifty-year-old song with the aid of the latest technology. 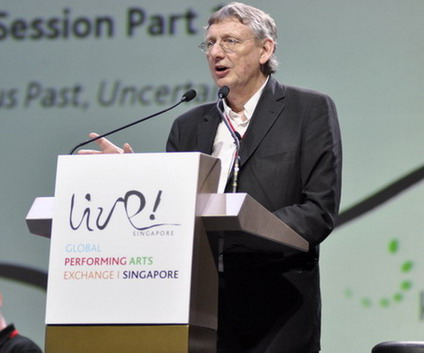 Getting the balance right between music which has both artistic value and crowd appeal is more of an issue in Asia where audiences in general are much less familiar with jazz and more used to a diet of smooth jazz which finds Bob James at its cutting edge and Norah Jones as it most familiar face. It is not always possible however, in spite of the best intentions, to include a local artist on the festival program as the otherwise excellent Miri International Jazz Festival found in'10, though it is a source of pride for Augustin that his Penang Island Jazz Festival has included a local band every one of its six years, surely an essential requirement in the promotion of local talent.

Whilst international jazz artists are increasingly enjoying the benefits of playing in Asia, from Japan to Korea and from Thailand to Malaysia, for jazz artists from Asia it is something of a mountain to climb to be heard abroad, as panelist Jeremy Monteiro observed. Monteiro has had a successful career as a jazz pianist for 35 years, and is known as The King of Swing in his home town of Singapore. He scored a notable success at Montreux '88, and has performed all over the world with the likes of Charlie Haden, Randy Brecker and Michael Brecker, James Moody, and Ernie Watts. There was however, a degree of frustration in his voice when referring to the stringent, not to say expensive visa requirements to play in America: "From there [America] to here [Asia] there's a three-way highway but from here to there there's a footpath. But you can't take it personally." 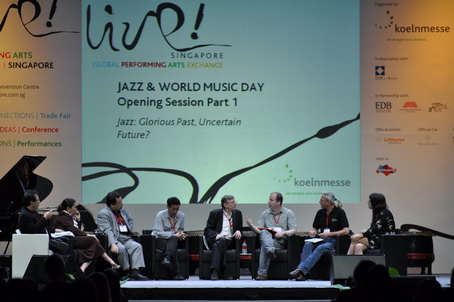 The author's presence on the panel representing jazz website All About Jazz was a reminder of what Zoran Mehta meant on day one when he talked of "the most extraordinary means of propagating our art" now within our reach. Just in the last twelve months All About Jazz has covered more jazz festivals than perhaps any other jazz publication in the world, and over 24,000 musicians globally have a professional profile at the site. With the slow death of the record companies, jazz musicians now have the technology to record their own music and to sell it via the web. Advocacy websites like All About Jazz, motivated by a love of the music, are playing their part in promoting musicians and their music in the globally changing market. Social networking and web-generated business is undoubtedly one of the greatest forces of the future and the way forward for many musicians to find a way into previously distant or inaccessible markets.