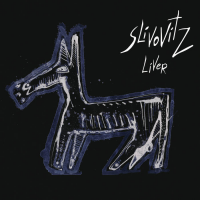 Slivovitz, and especially this live set, are not for the musical faint of heart.

As a live recording, LiveR is "live-r" than most. Recorded in Milan in May 2016, it explodes from their native Italy into your senses with a colorful and frantic sound, a wailing mongrel child that fiercely claims such shared, diverse birthrights as The Mothers of Invention, The Butthole Surfers, James White & The Blacks, The Stooges, and the Sun Ra Arkestra. Yes, all on the same release. In fact, all at the same time.

Slivovitz does not just play jazz. They ROCK jazz as hard as any hard rock, with monstrous grindcore electric guitars (Marcello Giannini), howling blues harmonica (Derek DiPerri) and electric violin (Richard Villari), a truly ferocious rhythm section (bassist Vincenzo Lamagna and drummer Salvatore Rainone), and dueling lead horns (Ciro Riccardi on trumpet and Pietro Santangelo on tenor sax), all of which play with such primal bloodlust you can nearly taste it. Horns and harmonies in "Mai Per Comando" suggest post-bop jazz but their accompanying rhythms and structures sound like anything but: Harmonica blues blow over bass and drum that spasm in a broken march, then the groove settles down into a rumbling jellyroll of R&B and funk and jazz and rock so electrified that they melt down into one single smoking musical circuit.

"Cleopatra" steps off with heavy, Deep Purple-y guitar chords but then the electric violin solo scrapes off everything except the rhythm section. All the instruments disconnect from each other, bark out their parts in sharp staccato, and then wobble back together for more deliciously messy and organic interplay. Electric violin on top of this type of rumbling free- form blues jazz suggests Frank Zappa's early recordings with violinist Sugarcane Harris, especially FZ's legendary Hot Rats (1969, Bizarre/Reprise).

Slivovitz brings Nirvana's "Negative Creep" back full circle to The Stooges' seminal grunge junkyard: Drums pound the beat into dust while the rest of the band stomps upon the riff like a Japanese movie monster until they bust it apart. Fierce and ferocious jazz-rock.

The way that Slivovitz, like the Sun Ra Arkestra, brings together so many different styles into their own interstellar sound, and then tears those styles apart, is nothing short of spectacular.