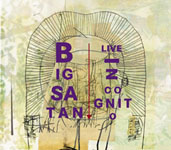 Some bands are best experienced live. There's simply no denying the energy and element of surprise that occurs when playing in front of an audience. In recent years, advances in technology and a corresponding reduction in costs have closed the gap between studio and concert recordings to the point where an increasing number of artists now favor live recordings—some, like pianist Keith Jarrett, exclusively so. Livein Cognito isn't Big Satan's first live recording, but given that this trio has convened at irregular intervals for a over decade, it's undeniably its best.

Unlike Tim Berne's other groups—Science Friction, Hard Cell and the wholly improvisational Paraphrase—Big Satan is a more democratic collective which splits compositional duties between the saxophonist and guitarist Marc Ducret. Ducret is a charter member of Science Friction, as well as two earlier Berne groups, Bloodcount and Caos Totale, so there's plenty of shared history that gives both writers an equally shared vision in providing material for Big Satan. Tom Rainey has been Berne's exclusive drummer of choice for ten years, and while he may not contribute formal composition, he's an equal partner when it comes to shaping the trio's sound.

It's a surprisingly big sound for a group that has nothing anchoring the bottom end. Bass-less groups are hardly unique these days, but Big Satan has always differentiated itself through its complete avoidance of apportioning out what might be considered a bassist's role amongst its members. Rainey often anchors the trio rhythmically when the emphasis is on form; but regardless of the composer, it's usually so idiosyncratic that one may feel a pulse, but most will be challenged to actually define it.

Even given the opportunity to watch the group, its ability to navigate between spontaneity and tight structure is remarkable. This is not music for the faint at heart, but it's far removed from a style that some consider disconnected navel-gazing. If the abstruseness of the writing and improvisation seems to mask a greater purpose on first glance, repeated listens reveal a responsive unit that, while no doubt capable of surprising itself at times, remains unequivocally intentioned.

As much focused on texture as phrasing, Berne, Ducret and Rainey are all capable of extending the sonic capabilities of their instruments beyond the expected. And while there's little here that could be called beautiful, the trio uses dynamics to create music that's emotionally far-reaching, with its own ebb and flow.

Dark and spacious in places, visceral, dense and penetrating in others, the impact of Livein Cognito can be heard in the audience's response. They may not always know how they're getting where they're going, but Big Satan fans can always be assured an intriguing trip.

Visit Tim Berne and Marc Ducret on the web.