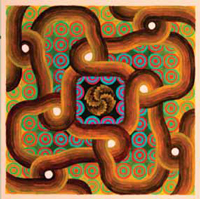 Boston area bassist Mike Rivard has led a running jam at the Lizard Lounge for over five years now, which is an impressive tenure for such an exploratory project. Club d'Elf, as the adventure is known, released its double-disc debut, As Above , in 2001 to critical acclaim; this year's output includes three (count 'em, three) more double-disc live sets recorded live in Athens, GA; New York City; and Poughkeepsie, NY, respectively. The ultra-low budget packaging leaves something to be desired, but the contents are infinitely more important.

The latter set, reviewed here, is an energetic, spirited jam that never dips in spirit or appeal. The Vassar Chapel has hosted celebrities from Jesse Jackson to Chris Rock and Billy Joel, but Club d'Elf is a decidedly more underground venture. This incarnation includes keyboard player John Medeski, violinist Mat Maneri, and oud/vocal/percussionist Brahim Fribgame, who are featured on all three new releases; as well as guitarist Randy Roos and drummer Erik Kerr. As with any jam situation, it's absolutely imperative that the bass and drums interlock to secure an anchoring pulse, and that's what happens here.

It's hard to figure out exactly how big a role Rivard plays in making this music work, but he's credited for production and composition most of the way through. The music feels like an updated '70s Miles Davis jam, open-ended and electric without becoming amorphous or wandering astray, sometimes downright groovy and others heading into psychedelic outer space. The emphasis on improvisation is realized more in the group dynamic than any individual soloing, though of course there are times when one player gets down more than others. (Such is the case with oud player Brahim Fribgame's grounding role on the Middle Eastern "Challaban" toward the end of disc two.)

In a hybrid setting like this where jazz is fused with rock and funk, there are bound to be loose ends, and that's part of what makes the 90-plus minute performance work. Club d'Elf is clearly a live experience (as the source material for the three new recordings attests). Depending on where you're situated, that may indeed be possible—but if not, this is the second best thing. Live or on record, Club d'Elf is an electrifying experience.