By ROGER WEISMAN
January 23, 2019
Sign in to view read count 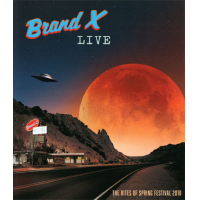 It seems odd that in their four decades of existence (admittedly, with some definite gaps in activity) Brand X has never officially released any type of concert video document. Then again, perhaps it's not all that surprising. Brand X has always been a musicians' band. Image never seemed to be a concern. It is fitting that this line-up would be the one to have the honor of being captured in the first Brand X concert film. During its first era, in the late 70s, the band would change its line-up not just from album to album or tour to tour, but sometimes even from night to night. Mind you, this was never a bad thing; Some of the finest musicians in the jazz/fusion/progressive rock movements came through the band, leaving their mark and bringing their own approaches and styles into the performances and recordings. Consequently, it is notable that this current line-up, consisting of founders John Goodsall (guitar) and Percy Jones (bass), along with Chris Clark (keyboards), Scott Weinberger (percussion), and Kenny Grohowski (drums), is one of the most stable that the band has ever had.

And it shows. The band gels and shines. Fans of the band, and aficionados of jazz/fusion, will be blown away by the interpretations of their classic material. The renditions maintain just enough fidelity to their original recordings, but throw in plenty of twists and turns, and inject a whole lot more muscle. Also, whereas, from album to album, the original recordings varied wildly in terms of personnel and production style, in this collection, the sonics are the only constant in a program of varied and dynamic music. Feeling much less like a greatest hits concert, the program plays like a conceptually whole suite.

Founders Goodsall and Jones sound as good as ever, and the new members certainly help make the music feel new and alive. Much of the new muscle comes from drummer Kenny Grohowski, who attacks the drums with an aggressive panache. One of the best things about the video is being able to see, even with his speed and power, the elegant fluidity in his playing. Alongside him, percussionist Scott Weinberger alternates between bringing droplets of color and throwing gasoline on the fire, vigorously attacking his rig in time with his counterpart. Keyboardist Chris Clark, brings his studious virtuosity to the music, but also at times a subtle, unexpected mischievousness. Reminding the audience that Brand X's original members had been active participants in England's prog and glam rock movements, Clark drops in little licks from Yes and Emerson, Lake, and Palmer into his phrases and improvisations. Once again, his solo piano rendition of "Maybe I'll Lend You Mine After All" (including a musical quote from ELP's "Trilogy") is pure gold.

The cover art reveals much about the visual approach to the film: A flying saucer, straight out of a 1950's B-movie hovering low in the sky on an empty road in the American south-west (Roswell, anyone?), with a giant blood moon ominously rising over the horizon. For the most part a straight concert document, it occasionally indulges in effects and tricky visual edits that seem aimed to emphasize the atmospheric qualities of the music hinted at by the cover: Mysterious, spacey, soaring, while occasionally menacing and foreboding. While some looking for an unadulterated fly-on-the-wall experience may find some of the edits to be a touch gimmicky and distracting, they are consistent with and inspired by the feel of the music.

At the heart of it, Brand X's music is about mood, texture, atmosphere, and dynamics. Frequently spacey or contemplative, it is also kinetic and driving (isn't anger a mood, too?). Brand X Live: The Rites of Spring Festival 2018 does an amazing job of guiding the listener/viewer on a voyage, drifting through different sensations, being carried through subtle changes in texture as well as not-so subtle changes in tempo and volume, while never being pulled out of the over-arching experience.

It is arguably the finest release of the band since their reconstitution in 2016 (the package also contains an audio CD of the performance). If this was the first, or only artifact you saw of Brand X, you would get a solid idea of what they are and what makes them great.

Nightmare Patrol; Disco Suicide; Not Good Enough; Born Ugly; Noddy Goes to Sweden; Why Should I Lend You Mine; Maybe I’ll Lend You Mine Anyway; Cambodia; Malaga Virgen.