By DAN MCCLENAGHAN
April 10, 2007
Sign in to view read count 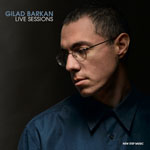 Boston-based pianist Gilad Barkan flew onto the jazz radar screen with a couple of simultaneously-released discs: guitartist Issi Rosen's Dark Beauty (New Step Music, 2003); and his own Modulation (New Step Music, 2003). Barkan teamed with drummer Harvey Wirht, of Either/Orchestra fame on both discs, and with bassist Dan Greenspan on Modulation. The trio's sound had a bright and gregarious forward momentum on both of those CDs. Bassist Greenspan's Modulation work was always in the pocket, and I thought Barkan and Wirht complimented each other marvelously—the pianist's sparkling percussive touch versus Wirht's busy, off-center, full-of-surprises punctuation.

Wirht and Greenspan are back for Live Sessions, offing up more of the same style of sound.

The double CD set was recorded live on WGBH Radio in Boston. The resulting music is fresh and spontaneous as the group immerses itself in Barkan's always well-constructed compositions. On disc one, it's just the Barkan/Greenspan/Wirht trio, exploring some of the tunes from Modulation—"Amaaravati Devi is Getting Married," "Affection," "This is Love," "Modulation" and more. Disc two finds the trio joined by flutist Amir Milstein. The crisp-edged rhythmic scaffolding remains the same, with the cool, airy sound of Milstein's flute blowing in and out of the bumps and angles. It is, again, a complimentary relationship, resulting in a sound that's light yet firmly anchored.

The excellent Live Sessions is shaded by the sounds of the Middle-East—Barkan was raised in Israel—and Brazil. His music is filled with tenderness and optimism and always a sense of adventure and fun. There's always a sense that Barkan puts his life and positive spirit into the music, creating an uplifting listening experience.