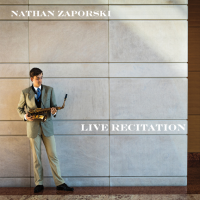 Nathan Zaporski is a composer and alto saxophonist from the Detroit area with a hard, sharp edge to his playing in the tradition of Phil Woods and Jackie McLean. On this live recording he shows his wares fronting a sympathetic quartet. Zaporski's sound is so speedy and relentless on the opening duo of Thelonious Monk's "Rhythm-a-ning" and his own composition "Wild Bill" he sounds like he's in an endurance contest. However he maintains a consistent sense of melody and feeling throughout.

"Atoll" is an easy riding blues where Zaporski solos at a more relaxed tempo while maintaining his intensity and Julian Tucker gets in a playful piano solo. Monk's "'Round Midnight" brings out the saxophonist's more lyrical side while "The 1st Of April" is a waltz that seems to have trouble settling on a consistent tempo though the musicians' playing is fine. Alex Warshawsky's bass playing is a particular standout. Charlie Parker's "Star Eyes" has Zaporski swirling and dipping nicely to a Latin backbeat while on Ellis Marsalis' "Swingin' At The Haven," he's back to the unrestrained post-Parker alto wailing he started the set with. Drummer Alvin Cobb also gets a bit of a workout on this one.

Zaporski is well served by his quartet here. Tucker, Warshawsky and Cobb all sound tight and together in supporting him and also get their own solo moments to shine. According to his website, Zaporski also composes in the classical, Irish and folk realms. It will interesting to see if any of that crosses over into his jazz work in the future. For now he definitely has the mainstream jazz part down cold.

Rhythm-a-ning; Wild Bill; Atoll; 'Round Midnight; The 1st of April (for Vienna); Star Eyes; Swingin' At The Haven.