By DOUG COLLETTE
January 30, 2009
Sign in to view read count 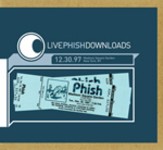 Releasing the three-CD Live Phish Downloads: Madison Square Garden 12/30/1997 in the wake of the mammoth At the Roxy (Jemp, 2008) makes a certain amount of sense. It is neither a groundbreaking performance nor a significant event within the band's oeuvre, such as its 1996 The Clifford Ball festival. The video counterpart of Madison Square Garden 1997, shot from a single camera's sound-board vantage point in the historic venue, available simultaneously with the CDs and download, substantiate the lighthearted atmosphere of this late-nineties holiday appearance.

Accordingly, the set list is plentifully peppered with covers, beginning with one of Phish's most successful forays into the funk field, Allen Toussaint's "Sneakin' Sally Through The Alley." Within its 10-plus minutes, the quartet uses the deep spacious groove as a launching pad to a place reminiscent of the exalted spring, 1997 "Island Tour."

Little wonder five more minutes of the tune appear during the encore, itself capped by nothing other than "Frankenstein." Whether Phish liked the riff Edgar Winter's hit or just played it purely tongue-in-cheek for close to twelve minutes matters less than its being preceded by Clifton Chenier's more roots-like My Soul" forty-five minutes prior. Toussaint would, no doubt, approve of that selection as well.

Jimi Hendrix would, no doubt, also be honored to hear the Vermont band tear through his "Isabella," which may be the most vicious hard rocker Phish has ever played. The solemn segue from Phish's "Chalk Dust Torture" to The Beatles' "A Day in the Life" is a far more worthwhile endeavor than wasting three minutes on The Proclaimers' "I'm Gonna Be (500 Miles)," with this solitary appearance of the tune in the Phish discography further "distinguished" by lyricist Tom Marshall's participation.

But no such comedic irony comes into play during the extended improvisation during "Taste." The dynamics of extended performances such as these are hardly less striking than transitions which contrast the light- hearted, country-inflected "Water in the Sky" with the ominous, drama-introducing "Punch You in the Eye."

25-plus minutes of "AC/DC Bag" give ballast to this recording, as does the bulk of "Harry Hood," but the latter unfortunately suffers for the absence of its usual exhilarating finish. As dubious as the band's choice of covers are here—or even its own compositional skill—as well as the spoken word intervals like that which extends "Harpua," it's Phish's playing that commands attention and upon which its reputation rightfully rests.