By JIM SANTELLA
September 27, 2006
Sign in to view read count 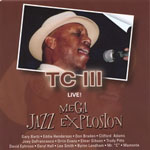 Singing impressions from the bebop era, T.C. III comes alive with the aspect of jazz introduced by hep cats like King Pleasure, Eddie Jefferson and Jon Hendricks. He gives it the same kind of rhythmic energy. They're some of our favorite songs: the kind that can stand alone in almost any situation.

T.C. the Third is based in New York. He's the son of noted pianist/organist Trudy Pitts and drummer Bill Carney, aka Mr. C. The inspiration and training came from family, but the heart is all his own. T.C. III's lush baritone voice weaves velvet threads around each selection, while his all-star band turns out a successful venture.

Slower ballads like "Song for Debra and "Bird Alone bring a wave of romantic concern to the program as T.C. III wades languorously through in slow motion. Faster tunes such as "Blue Monk and "If I Were a Bell turn him loose with yodels, yarns, yells and a few yawns. The singer recalls the work of his vocal jazz forefathers without adding anything new. He's stiff part of the time and seems unwilling to let go. The live audience spurs everyone on, but it's not enough to bring on the kind of explosion that the album's title implies.

The high points are the two longest selections, which are also the most creative. By stretching out for over ten minutes, the whole organization finds room to smoke. A Latin jazz interpretation of "Bright Moments features hot solos by trombonist Clifford Adams, tenor saxophonist Don Braden and organist Joey DeFrancesco.

Abbey Lincoln's "Bird Alone, a thoughtful ballad, finds T.C. III applying the same unique vocal features that only Abbey Lincoln can do well. Fortunately, it's an extended piece that allows everyone plenty of room to roam. A beautiful piano solo by Trudy Pitts sends fireworks all over the place, as bassist Lee Smith and drummer Mr. C make it an intimate family affair.

Together, these two selections save the Mega Jazz Explosion from obscurity. After all, two volcanic eruptions among a world of dog day afternoons do bring some thrills into the picture. The album comes with delightful liner notes by Jon Hendricks that carry the same kind of spontaneous energy that Hendricks himself delivers when he performs. His comments are informative, to the point, descriptive and right on.

Rome Alone (Blue Monk); So What; Song for Debra; Freddie Freeloader; Bright Moments; If I Were a Bell; Bird Alone; Song for My Father; Jazz Is.