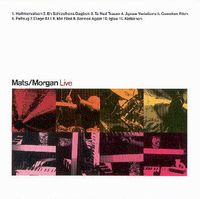 In their teens, drummer Morgan Ågren and keyboardist Mats Öberg were invited to perform with Frank Zappa and, as the story goes, the Swedish duo formed this phenomenal ensemble that exercised a jaw-dropping mode of execution within the progressive-rock schema, amid some Zappa and jazz-centric influences. Revered for its otherworldly approach to the genre and superior technical faculties, Mats/Morgan Band is known for its exhilarating live performances and manifold approach to composition.

Rooted in a multifaceted constitution, "En Schizofrens Dagbok," is entrenched with hyperactive funk grooves, ferocious exchanges, scorching guitars, tricky time signatures, and jovial melodic content. Serious-minded but sprinkled with quaint sensibilities, the musicians' divergent implementation tender split-second breakouts, polytonal treatments and fluent cartoonish escapades. The differentiator resides within the artists' penchant for merging a chops-heavy element with sustainable themes and passages that move along with the impetus of a fast-paced action thriller. Its progressive rock with a college education by an outfit that has few, if any, peers in the business.