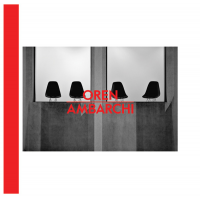 "Knots" was originally a thirty-three minute track that was the centrepiece of Oren Ambarchi's album Audience of One (Touch, 2012). On the elaborate production, Ambarchi's own guitars, autoharp and percussion were joined by strings and French horn arranged by Eyvind Kang, plus drummer Joe Talia and vocalist Stephen Fandrich. Being full of drama and variety, the piece was an obvious choice for Ambarchi to take on the road, which he duly did in 2013. Now come the recordings that resulted from those concerts, the album appropriately enough being named Live Knots. It consists of two live renditions of "Knots," the first lasting twenty-four minutes, recorded at SuperDeluxe in Tokyo in March 2013, and the second, over forty-one minutes, from Krakow in October 2013. The music from Krakow may have been subtly enhanced, as the album credits for Krakow also mention "additional recording June 12 2013 by John Chantler at Cafe Oto." Whatever purpose those additional recordings served, the YouTube clip below captured the Cafe Oto gig on the night in question. (YouTube has good footage of the Tokyo Knots gig, too.)

Taken together, those four versions of "Knots"—original, Tokyo, Cafe Oto, Krakow—indicate the strengths of the piece and its scope for varying versions. The common denominator throughout all four versions is propulsive drumming from Talia, which underpins everything that is laid on top of it. Given the key role he plays, it seems the drummer merits more credit than he is afforded. The Tokyo version is the simplest of the four, with only the duo of Ambarchi and Talia involved. Stripped back to its essential elements, it feels starker than other versions but it centres on the key interaction between drums and guitar that drives the piece. The depth and breadth of the music the two produce means that they frequently sound more akin to a high-energy power trio than an improv duo, with Ambarchi often simultaneously providing the equivalents of lead and bass guitar parts. The two are adept at building momentum and tension then releasing it, to thrilling effect. This pared-down version would seem to be the archetype to which all others should be compared.

By comparison, the considerably longer Krakow version is more elaborate, while retaining the essential features from Tokyo. Rather than opening with percussion, it adds an extended opening section consisting of droning notes and plucked strings, gently leading into a slow build-up from Talia that heralds the arrival of the guitar. Throughout, the strings of the Sinfonietta Cracovia play an important role in expanding and altering the soundscape, interjecting a series of swelling chords which add coloration and intensify the inherent drama of the piece. As before, the drums and guitar work together towards a very rockist crescendo before managing a satisfyingly soft landing. Rounding things off, as a finale, Talia and Crys Cole combine in an effective exchange of amplified springs and objects with accompanying strings. This is a very different version of the piece, one that was deservedly hailed by the vocal Krakow audience.

On the evidence of Live Knots , "Knots" seems certain to be an in-demand part of Ambarchi's live repertoire for some time, but not one that will become a millstone around his neck. With the scope for variation it offers, it would be no surprise if further live versions were to emerge. Can't wait!