By JOSHUA WEINER
January 7, 2004
Sign in to view read count 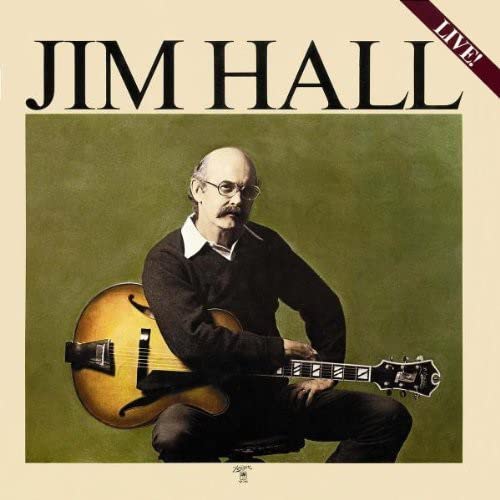 Jim Hall is our greatest living jazz guitarist, and probably one of our greatest jazz musicians, regardless of instrument, to boot. So why, despite being widely acclaimed by jazz aficionados, is he not exactly a household name? It probably has to do with his innately self-effacing demeanor, both on and off the bandstand. Beginning in the late 50's and continuing on through the 60's, Hall worked as a sideman, albeit one who was often essentially a "co-leader", with Jimmy Giuffre, Paul Desmond, Art Farmer, and Sonny Rollins, among others. Even when he began making records more frequently under his own name, he tended to make quiet, intricate, and lovely music as an equal half of a duet: with Bill Evans, Ron Carter, and others. There are relatively few vintage records featuring Hall soloing at length as a leader of a group.

This is why another excellent reissue in the Verve Lp reproduction series, Jim Hall Live!, is so welcome. The music is taken from a series of 1975 club dates at Bourbon Street in Toronto, and features Hall in a trio with Canadians Don Thompson and Terry Clarke, with whom Desmond also made some great Bourbon Street recordings. The three obviously hit it off famously, and it is a pleasure to hear Hall let it rip on these five standards. The group is swinging and appealingly loose, going for broke so much that they get a little confused at the end of "Scrapple From the Apple" and humorously grasp for an ending to "The Way You Look Tonight".

Although bassist Thompson (who also made the clear and lifelike recording---what did he do, push the faders with his toes?) takes some nice solos (check out the quote of "One Note Samba" in "Angel Eyes"), this is Hall's show, and he doesn't disappoint. He combines beautiful single-note phrases with his trademark chordal runs to weave a tapestry of continual invention on a long "Angel Eyes", caresses the many harmonic possibilities of "'Round Midnight", and boppishly burns his way through "Scrapple". "I Hear a Rhapsody", taken at a sprightly pace, features some excellent counterpoint soloing by Hall and Thompson. Drummer Clarke provides tasteful, but unobtrusive contributions throughout.

For fans of Hall familiar only with his more mannered playing, this freewheeling live date will be a welcome revelation.

Angel Eyes; 'Round Midnight, Scrapple From the Apple, The Way You Look Tonight, I Hear a Rhapsody