By MARTIN GLADU
November 25, 2007
Sign in to view read count 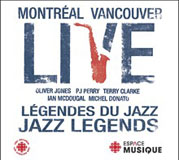 Despite the Canadian Broadcasting Corporation's conservative jazz radio programming, one would be hard-pressed to extirpate negative comments from musicians about the behemoth, as all have come to respect its continued presence and assistance maintaining an appreciative national audience. Indeed, true to its mission statement, the multi-platform state-owned network has always proactively fostered domestic talent, providing artists much-needed exposure in addition to availing them of its state-of-the-art infrastructures. Moreover, one could try and argue these premises, inhabited by the spirits of all the greats that have used them throughout the years, are in fact integral to the mix from which emanates a perceivable yet still hard to define Canadian sound.

Though a live set, Live—Jazz Legends is a typical CBC project. Spearheaded by the dedicated teams at Radio Two (CBC's English-speaking music radio network) and Espace Musique (its French-speaking alter ego), the two-date event, taped on location in Vancouver, British Columbia and Montreal, Quebec, features established as well as upcoming artists of both cultures.

The opportunity it offers the younger generation (namely saxophonists Evan Arntzen, Tara Davidson, trumpeter David Carbonneau and bassist Karine Chapdelaine) while generous in intention, feels somewhat restrained contextually. The two lethargic, mid-tempo blues, as well as Paul Simon's rather dreadful "Still Crazy After All These Years"—all accounting for more than one-third of the total playing time—that serve as their showcases, leave one's piqued curiosity hanging. While Carbonneau's conspicuous Kenny Dorham/Lee Morgan-influenced phrasing and moans are quite entertaining, one longs to hear him play something more adventurous than yet another twelve-bar blues (there are three on the album).

Out of retirement for the occasion, fleet-fingered pianist Oliver Jones graces the program with his rooted-in-gospel playing. With stalwart bassist Michel Donato and Terry Clarke's un-deterring drumming, they provide the solid support required on such swinging sessions. On trombonist Ian MacDougall's infectious "Zimbabwe," the seasoned veterans treat the audience to a genuine, head-bopping feast.

But, considering the innumerable options available to potential buyers (not to mention the CBC itself), Live-Jazz Legends remains a marginal release. And, although one-third of the disc is somewhat commercially un-compelling, one can objectively root for a warm reception.

Teaneck; Bleu Sur Le Vif; If You Could See Now; Stolen Moments; Zimbabwe; Song For Ruth; Ba-Lue Bolivar Ba-Lues-Are; When You Wish Upon a Star/Someone to Watch Over Me; Still Crazy After All These Years.