By JOHN BARRON
September 26, 2008
Sign in to view read count 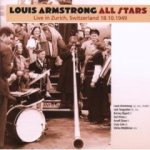 If you're looking for a quick-fix, musical pick-me-up, Louis Armstrong is usually a sure-fire guarantee. A wonderful example can be heard in this gem of a radio broadcast, recorded in Zurich, Switzerland in 1949. Featured with the trumpeter is the incomparable Jack Teagarden (trombone) and Barney Bigard (clarinet) romping through a set of toe-tapping familiar fare.

The feel throughout the concert is loose and relaxed. Armstrong and company are obviously relishing in the enthusiastic response of the audience, who seem to be hanging on every note. The traditional three-way improvising between trumpet, clarinet and trombone is as good as it gets, setting up splashes of individual virtuosity.

Armstrong is nothing short of brilliant, stretching out rhythms and hitting high notes with ease on well known classics like "Royal Garden Blues" and "Struttin' With Some Barbeque." While the emphasis here is on Armstrong's instrumental prowess, the power of his vocalizing is equally astonishing. The bittersweet, melancholy he puts forth singing "Black and Blue" and "Back o'town Blues" is a highlight of the session.

Teagarden's lazy vocalizing and trombone soloing on "Basin Street Blues" is the epitome of humor mixed with hippness. Bigard's sweet tone and blues-drenched phrasing is featured prominently throughout, especially on "Body and Soul."

For a radio broadcast from the 1940s, the overall sound quality is quite good, especially noticeable during rhythm section breaks. Every note played by pianist Earl Hines, bassist Arvell Shaw and drummer Cozy Cole is heard loud and clear. A bonus treat of the disc is a trio rendition of "Honey Suckle Rose," featuring Hines' staggering double-time piano work.

The rare photographs included in the disc booklet add to the historical allure of a release sure to enthrall Armstrong enthusiasts and casual listeners alike.