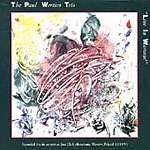 If your knowledge of Paul Wertico is limited to his work with the Pat Metheny Group, you might not realize the extent of this man's ability. Live In Warsaw shows another side to a drummer who's better known for his finesse than his quick hands.

Recorded one night during a two-week tour of Germany and Poland in October 1994, Live In Warsaw also features the gifted John Moulder on guitar and Eric Hochberg on bass. The three Chicagoans display great chemistry as they tackle unbound improvisations, fiery fusion, deep grooves, impressionistic intervals, and even a blues tune. At the core of each cut is some incredibly polyrhythmic drumming by Wertico.

Live In Warsaw contains eight tracks, seven of which are originals. Six of these numbers exceed six minutes in length, but only one gets tedious: the opener, "Toms For Talia," an interesting but drawn-out drum solo. Moulder and Hochberg join Wertico on "Cowboys and Africans," an intense groover that begins with Hochberg's bowed bass and segues into some fiery rhythms and an especially hot solo from Moulder.

All three players share the spotlight on a crackling nine-minute interpretation of "Softly As In A Morning Sunrise." Hochberg delivers impressive solos on the diaphanous "Little e" and the free-sounding "8x12." The bassist forges a tight partnership with Wertico from beginning to end.

Incredibly, guitar-man Moulder also happens to be a Roman Catholic priest. Prior to this, the only song I'd ever heard a priest play on guitar was "Kumbyah." Father Moulder's masterful string-bending invites comparisons to another heavenly guitarist, John Scofield, particularly on "Time For The Blues." The padre also gets ethereal on a couple of tracks, including the aptly named "Magical Space."

The live-to-DAT sound captures every crisp nuance of Wertico's percussive performance. In fact, there are many stretches here where you'd swear you're hearing two drummers.

If you dig adventurous guitar-based jazz or exceptional jazz drumming, it doesn't get much better than The Paul Wertico Trio's Live In Poland.