The Urge Trio: Live in Toledo 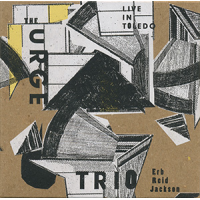 Swiss reedman and noted improviser Christopher Erb performs with likeminded Chicago cohorts, cellist Tomeka Reid and reedman Keefe Jackson, captured during the final gig of their 2013 US tour at the Robinwood Concert House in Toledo, OH. Hence, they vibrantly interact and create a predominately stark or perhaps naked soundscape, devised on minimalism, pathos, probing dialogues and bizarre manipulations of their respective instruments.

Reid often operates at the mid-point, as Jackson and Erb toggle between bass clarinet and tenor saxophones. The musicians spark a creaky and serrated musical environ built on hallowed voicings, quivering notes and upper-register voicings to complement doses of controlled mayhem along the way. They volley ideas via spiking ebbs and flows while also engaging in a consortium of razor-sharp plaintive cries. But it's the improvisational focus that serves as the primary underpinning for expansion, complemented by strangely appealing modes of communication, where Reid periodically uses the cello as a percussion instrument.

With only 2 lengthy tracks, the fractured flows and deviations are etched on a wide-open playing field. Erb and Jackson's performances are delineated through the left and right channels amid a throng of variable contrasts and primal musings. For instance on "Manne Du Ciel," the reedmen's flickering and circular phrasings; droning and weeping lines are supplemented by peculiar overtones, especially when they incorporate the bass clarinet into the mix. Yet the primary source of interest pertains to how the musicians generate a multitude of diverse mini-motifs and absorbing dialogues without blowing matters out of proportion.

About The Urge Trio