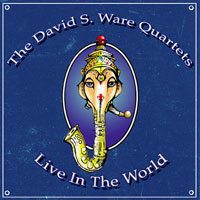 It didn't take much time for the jazz world to appreciate the talents of David S. Ware , whose first quartet disc was recorded fifteen years ago. In the ensuing period the tenor saxophonist has made about a recording a year with the group, whose only changes in personnel have occured at the drum chair. Ware's playing draws broadly from the free jazz tradition, but it steers mercifully clear of the clinical approach adopted by many European improvisers. His compositions seem designed from the outset to match the strengths of his bandmates, who treat the canvas of sound as something to stretch, warp, and remold in the spirit of the moment, capturing an organic, ephemeral glow.

In its response to Ware's powerful and openly emotional music, the press has branded him a "tenor titan"—as it has done with many others over the years, but rarely so aptly. When Ware found himself working with producer/manager Steven Joerg in the mid-'90s, he helped earn Joerg's AUM Fidelity label its position as the contemporary vanguard of so-called "ecstatic jazz," a term which hit the mark but, predictably enough, grew tired through overuse.

Three years have elapsed since the DSWQ's last recording, which is a long time. Live in the World makes up for that by stuffing its three CDs to the very limit. The set also offers something unique: a chance to hear the band stretch out in live performance. Each disc presents a different show (from 1998 or 2003) and features a different drummer ( Susie Ibarra , Hamid Drake , or Guillermo E. Brown ). The sonics are balanced and well-resolved, allowing each player's voice to be heard clearly and cleanly. Unfortunately there is nothing whatsoever by way of liner notes beyond Ware's dedication, but that's not really a problem.

It's important to treat Live in the World with the respect that it deserves. This is not background music, nor is it easy listening. It requires attention and involvement. Pace yourself.

Ware packs a lot of depth into his music, which he views as a vehicle to connect with the spiritual world—and in the process transport his audience to new realms. He often envelops notes in a bed of overtones, crafting extended releases of swirling ascent and twisting reversal. Not to say that he doesn't have the patience to stick to simple melodies, obey fixed formal structure, or swing when required, but somehow he always tends to gravitate toward the celestial.

Pianist Matthew Shipp and bassist William Parker , as abundant recorded evidence has demonstrated over the years, have a rare joint intuition which allows them to enter into phases of shared meditation and release, often drawing from a deep, trance-like African essence, but not hesitating to dig a groove at other times, either. Observant listeners will enjoy comparing the three drummers' styles; the highlights come during disc 2, where Drake seems to effortlessly balance an otherwise highly percussive and polyrhythmic rhythm section.

These nearly four hours of music stack up with the DSWQ's best work, drawing upon source material from eight records and imbuing it with an unearthly luminescence. Ecstasy, indeed.