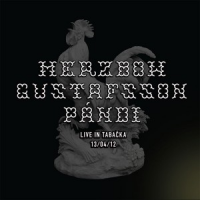 Let's bring back the maxim; "If it's too loud—you're too old." Certainly, when you listen to noise-music (is that an oxymoron? Absolutely not.) loudness is to a composition, what rhythm is to George Gershwin. That said, Live In Tabačka 13/04/12 is fascinating noise.

The pairing of Merzbow and Pándi has been a regular occurrence, and with Gustafsson and Sonic Youth guitarist Thurston Moore, Merzbow released Cuts Of Guilt, Cuts Deeper (RareNoise, 2015).

This live date, like Cuts benefits from the hardcore drumming of Pándi. His rhythms shape the affair, channeling the energies of Merzbow's noise and Gustafsson's live electronics (he doesn't pick up his saxophone until Side Two) into a, dare I say, coherent form. The onslaught of noise, both electric and percussive, begs the question, where does this music come from? It's roots are in the distortion and feedback of Jimi Hendrix, the energy of Ornette Coleman's Free Jazz (Atlantic, 1961), DIY punk/hardcore, psychedelia, and improvisation.

The clamor of the first side peaks with the second. Gustafsson picks up his baritone and blows an ocean liner's horn salute before tearing into lung busting registers. With Merzbow scorching the landscape with unceasing sound, the energy is best directed through the drummer's pulse. Midway through, the trio pauses to catch some oxygen, then Gustafsson and Merzbow return to their battle of live electronics, like Godzilla vs. the Smog Monster. Such is this gargantuan outing.