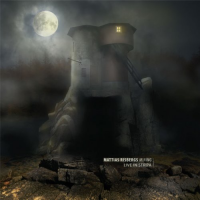 Science is beginning to acknowledge that life on earth probably began under the surface and not in some ocean. Millions of years ago, the atmosphere was so acidic, it could not support life. But underground, the conditions were ripe for single cell organisms to thrive. Today scientists discover bacteria that live nearly a mile underground without the requirement of solar nourishment. If you follow the thread, it is plain to see why many an ancient civilization's origin narratives reference caves as the domicile of their gods and maybe why pianist Mattias Risberg chose to record Live In Stripa in an abandoned mine in Berglagen, Sweden.

Composing an entire album of cavern music was quite a chore, but Risberg has accomplished something astonishing. His discovery, there is life underground. From the initial "March," a tromp or footslog into the subsurface is described as ominous, maybe even dangerous. Dan Berglund's bass sets the pace, David Stackenäs' guitar and Risberg's keyboard effects warns you of the inexplicable unexplored to come. Risberg has created a claustrophobic opera with vocalist Mariam Wallentin as narrator and his longtime partner saxophonist Fredrik Ljungkvist as a sort of anchor, let's call it a lifeline to the surface. "Open Up" twists a blues into some swinging bebop before deconstruction into disorder. There is a driving insistence to the music here. "Digging" and "Rödhåriga Gösta" propel you into the darkness. You can almost feel the bats and rats described in "Cave'n Caverns" negotiating the moist confines of the mine. This jazz and improvised version of a rock opera is both claustrophobic and yet inviting. Don't worry, you can experience the mines of Stripa in the safety between your ears.