By JOHN KELMAN
October 6, 2007
Sign in to view read count 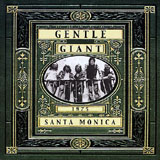 With DRT's 2005 35th Anniversary remasters of much of Gentle Giant's back studio catalog, the opportunity to hear this remarkable 1970s progressive rock band in performance from back in the day is being embraced by a new group of fans—many who were too young (if even born) at the time.

Live in Santa Monica 1975 comes with a warning, however: while a legitimate commercial release, it's more bootleg in quality. In some spots the quality is thin, but listenable and clear; elsewhere the sound is muddy; some songs begin abruptly and a few bars in; and two aborted takes of "For Nobody, from a 1977 performance, are curiously appended to flesh the disc out to a still spare forty-four minutes.

It's a safe bet that Santa Monica is not a good entry point for Giant novices, but for existing (and, perhaps, pathological) fans there are a number of things to recommend.

First, by this time keyboardist/multi-instrumentalist Kerry Minnear—always less-than-confident about his singing—had sworn off lead vocals in performance, making it necessary for Derek Shulman to assume all lead vocals outside of the studio. And while Shulman would sing "Experience, from In a Glass House (1973) on the group's commercial live release Playing the Fool (1977), here fans get the rare opportunity to hear Minnear sing lead vocals during the first half of the song.

Second, Giant was tackling some of its back catalog by turning it into medleys. Here, unlike Playing the Fool, there's the opportunity to hear "Advent of Panurge, from Octopus (1972), and "Experience as stand-alone songs. And, for ardent Giant fans, that alone is worth the price of admission.

Sound quality aside, it's an energetic performance. "Cogs in Cogs, from The Power and the Glory (1974)—despite entering a few seconds in, and with tape wow and flutter causing some annoyance—exemplifies much of what defined Gentle Giant: complex material filled with rich counterpoint that, nevertheless (and more than many of its peers), rocks hard.

Giant's studio releases—in particular the early ones before drummer John Weathers joined—were always a tad rarefied, but live rearrangements always added a lot more grit to the mix. The Power and the Glory's "Proclamation is even more visceral and funky than the version on Playing the Fool. Another misstep of Santa Monica, however, is that "Proclamation segues into an uncredited version of the folkloric-meets-pseudo-classicism-meets Caribbean rhythms of "Funny Ways.

The two aborted runs at "For Nobody, from Missing Piece (1977) are for archivists only, being of extremely poor sonic quality. Still, for Giant enthusiasts who want to hear how this group continually reinvented its shows by melding different pieces together, and managed to achieve the near-impossible—move from passage-to-passage with seamless instrument changes that ranged from conventional rock instruments to cello, violin, trumpet, saxophone, recorders and more—Live in Santa Monica 1975 is a flawed, but unique window into this innovative group in its heyday.