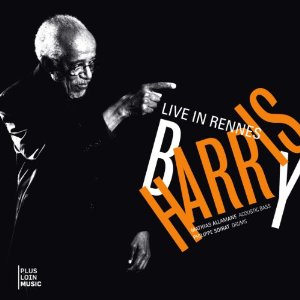 The city of Detroit was once an incubator for some of the greatest jazz piano talent in the world. Hank Jones, Tommy Flanagan and Sir Roland Hanna all came from the Motor City and contributed volumes to jazz history. Sadly, all three of those giants are gone now, but Barry Harris is keeping the flame alive. Harris is the last man standing from this exclusive club, and he continues to educate the masses through his workshops in New York and concerts all over the world.

Live In Rennes documents a trio performance recorded in France during the fall of 2009, and Harris is his characteristic self, delivering sharp takes on material from the fathers of bop (Charlie Parker's "Parker's Mood" and Bud Powell's "I'll Keep Loving You"), jazz royalty (Duke Ellington's "Prelude To A Kiss") and his own catchy compositions ("Nascimento").

While Harris might be recognized by some as the last connection to Detroit's piano past, he's also viewed as one of the strongest living connections to Thelonious Monk. Harris lived side by side with Monk, at the residence of Baroness Pannonica de Koenigswarter, for a period of time in the '70s and he continues to spread Monk's musical message to the world. "Off Minor," "Light Blue" and "Ruby My Dear" are expertly delivered here. and Harris educates the audience as to the authenticity of jazz musicians today being based on their ability to perform part of the jazz repertoire in their concerts.

Harris' educator hat is also in place when he delivers an instant song, based on scale degrees called out by the audience. On this CD, the song is "6, 5, 7, 3," but it's different every time he performs, and he always seems to be able to pull the audience in with this music theory lesson-cum-song. While Harris' between-song interjections, ranging from thirty-six seconds to five minutes, can disturb the pace of the at-home listening experience, they help to present a complete picture of a Barry Harris set on any given night, making this a most valuable recorded document.