By DAN MCCLENAGHAN
September 13, 2005
Sign in to view read count 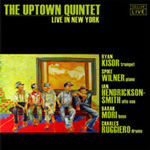 Let's start off with the meat of the matter: Live in New York is hard bop of the highest order; it drives straight ahead with a crackling energy. If Art Blakey can hear this disc up in jazz heaven, he surely has a big grin on his face.

And now a tangent. You've got to love the cover art: a clean line design, nice geometry, a square within a square, and enclosed in the smaller of the two, a painting (by Madeline Bachan Kaur Sullivan) of five codgers on a bench—a bit of a joke, perhaps, about the relative youth of the players who comprise the Uptown Quintet.

The disc opens with altoist Ian Hendrickson-Smith's "O'Cleary's Shuffle"—and since I've mentioned Art Blakey, this has a real "Moanin'" feel—with a unison statement by Hendrickson-Smith and trumpeter Ryan Kisor, follwed by a series of spirited solos by first alto then trumpet, then Spike Wilner's piano, then Barak Mori's bass in front of Charles Ruggiero's whispering cymbals, relaxed and inspired at the same time.

From a shuffle to a cooker, pianist Wilner's "In the Kitchen" turns up the heat, with Hendrickson-Smith keeping the flame up high on his turn. Wilner and Ruggiero rollick on the keys and skins, and Kisor sizzles.

The set is nicely paced, full of spontaneity, first-rate musicianship, and group interplay... hard bop at its finest.

About The Uptown Quintet