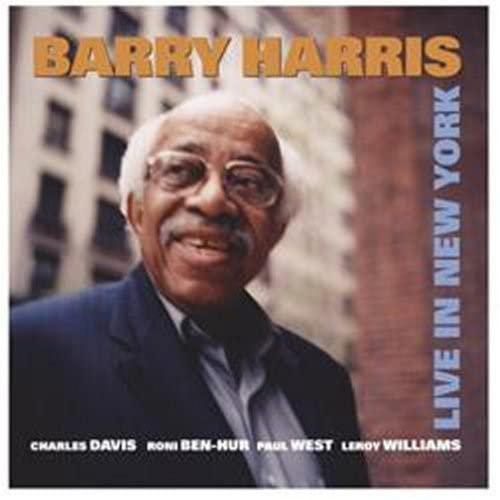 Maestro Barry Harris, who's never at a loss for an appropriate note or phrase, leads a well-coordinated quintet through its paces on this smooth-as-velvet but no less invigorating date, recorded 'on location' (we're not told where) in New York City.

Harris, one of the leading bop pianists of the past forty years and now an elder statesman at age seventy-four, remains at the top of his game, enhancing his marvelous chops with a storehouse of resourceful ideas whose shelves are always well-stocked. He is in the company of four similarly accomplished musicians whose voices are as strong and sure as his own, and their impressive camaraderie is a hallmark of this warm and consistently inspiring session.

Harris opens with Tadd Dameron's swaying 'Casbah,' based on 'Out of Nowhere,' and, being the gentleman that he is, allows tenor Charles Davis and guitarist Roni Ben-Hur to have a go before adding several persuasive choruses of his own. Harris's brisk, boppish 'Monking Around,' based on another venerable standard, 'Strike Up the Band,' includes perceptive statements by every member of the group. Drummer Leroy Williams wrote the soft and lyrical 'Two Step,' which precedes another homage by Harris, the gentle samba 'To Dizzy with Love.'

Monk's classic ''Round Midnight' unfolds at an oblique angle before aligning its course to accommodate ardent solos by Harris, Ben-Hur and Davis. Harris involves the audience in the finale, asking them to call out numbers from one to eight. After choosing the numbers seven, four and three, he immediately transforms them into an impromptu yet captivating melody, which he calls (what else?) '7-4-3,' encouraging the audience to sing along as he unravels it'a perfect way to crown the performance and leave everyone feeling pleased and satisfied.

I hope it doesn't sound like gushing when I say (as others have) that Barry Harris is without question one of the most eloquent and tasteful Jazz pianists on the scene today. His supporting cast on Live in New York is first-class, and even though marveling at their split-second brilliance via compact disc isn't quite the same as having been there, there's no reason why you too shouldn't be pleased and satisfied after doing so. And unlike an audience, you can replay and admire the performance as often as you like.