By ROBERT SPENCER
April 1, 1997
Sign in to view read count 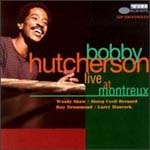 Did you catch Bobby Hutcherson in the movie Round Midnight with Dexter Gordon? Hutcherson played another musician: a comparatively well-adjusted, kindly one. I had the impression watching that movie that being well-adjusted and kindly was not particularly a stretch for Bobby Hutcherson; that conclusion is supported by the music on this album. This CD captures Hutcherson's relaxed and confident quintet at Montreux in 1973. Woody Shaw (trumpet), Hotep Cecil Bernard (piano), Ray Drummond (bass) and Larry Hancock (drums) augment Hutcherson's vibes. Hutcherson wrote two tracks, the bright "Anton's Bail" and the passionate "Farallone," a CD bonus cut.

As the only horn on this album, Woody Shaw is massive. He contributes the other two of the four tracks, "The Moontrane" (the title track of one of his own fine albums) and "Song of Songs." On these two cuts the passion of his playing is moving while never getting away from real melodic invention.

Actually that could be said for all four cuts on this album; Shaw is consistent and superb. His solos are in the soaring Coltraneish mode popular among those still playing jazz at the time, but Shaw was not just a derivative voice. He nods to Lee Morgan here and there with a few slurring, whirling lines, which he's often liable to follow in the next breath with a sharp, slashing Freddie Hubbard-style attack. But like all masters, he is not merely copying his influences but incorporating their discoveries and breaking new ground of his own.

Hutcherson, of course, is equal to the challenge. On "Song of Songs" his playing is fleet, cogent, and lyrical, while edging toward the borderlands he explored most famously on Eric Dolphy's Out to Lunch. He is thoroughly the master of his instrument, with a breathtaking range: one moment Hutcherson can use the vibes like a gong for sonority and in the next second like a happy child's toy. Hotep Cecil Bernard is in a McCoy Tyner bag on this album (but who wasn't in 1973?). He adds a dash of Cecil Taylor here and there as well, particularly, again, on "Song of Songs."

All this adds up to a thoroughly enjoyable glimpse of the best side of jazz in the early Seventies. In other words, this album is within a tradition but not self-consciously imitative, and innovative but not mannered. It swings without electricity or a rock backbeat. It's simply some top musicians at the top of their game. If you like jazz, you'll like this one.