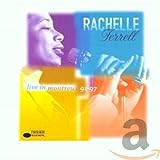 The title of this album is somewhat misleading. This is not a collection of songs covering appearances by Rachelle Ferrell during the period 1991-1997. They are from just two visits to Montreux, mostly in 1991. If you didn't know that Ferrell is supposedly possessed of a range of more than six octaves...which exceeds the four or five that Peruvian singer Yam Sumac had... you will find out quickly after putting this CD in the player...and she never lets you forget it. But her idiosyncratic, some might use the term distorted, way with the music seems to have little to do with her wide vocal range. Rather, it's just her way of presenting the music. There are yips, yaps and other assorted noise on such cuts as "You Don't Know What Love Is" and "Don't Waste Your Time". Being idiosyncratic and free wheeling in and of themselves are not bad and more often than not, quite good as long as the eccentricities still make the music accessible to the listener. On this CD, it's a mixed bag. "I'm Special" is a lovely R & B tinged ballad where Ferrell's vocalizing, while distinctly expressive and impassioned, has a modicum of discipline to it. Her affectations actually work to her advantage on "Bye, Bye Blackbird" which she kicks off with just Tyrone Brown's deep pitched bass behind her before seguing into a wildly swinging, scatting version of this tune. Eddie Green gets plenty of solo time on piano on this cut. The last two cuts are from a July 1997 appearance and are done in French, much to the delight of the crowd. But here Ferrell moves to one of the higher octaves on "On Se Reveillera". The result is a lovely presentation, but the diction suffers. "Me Voila Seul" done at a lower pitch is more satisfactory. George Duke shows up on some cuts with his smooth jazz keyboards.

Ferrell fans will enjoy this set immensely, others may have to take it in more than one sitting. Overall, the extra time is worth it because she truly has an one of a kind set of pipes. Visit her web site at www.rachelleferrell.com.

Claude Nobs Intro; You Send Me; You Don't Know What Love Is; Don't Waste Your Time; My Funny Valentine; I Can Explain; I'm Special; Bye-Bye Blackbird; Prayer Dance; With Every Breath I Take; Me Voila Seul; On Se Reveillera