By JEFF STOCKTON
March 6, 2010
Sign in to view read count 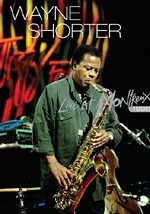 Wayne Shorter may look 20 years younger than 76, but he is quite simply one of the last giants, every bit as influential and artistically significant as Sonny Rollins, perhaps second only to John Coltrane when one considers his compositions and just how many of them have become jazz standards.

Much of Shorter's legendary artistic output dates from the first half of his life up to about 1970, encompassing stints with Art Blakey's Jazz Messengers, Miles Davis' second great quintet and as a leader on a string of classic sessions for Blue Note records. Starting with Miles' turn toward electricity and Shorter's co-founding of Weather Report, it's as if (in the eyes of fans of hard bop) he took the second half of his career off, participating in the occasional misguided collaboration, recording ill-advised new-agey fusion or generally selling out his talent like the Rod Stewart of jazz.

Live at Montreux is Shorter's nearly hour-long performance at the famed festival in 1996 with an electric band playing in support of the 1995 Verve album High Life (at the time, his first solo album in seven years). Viewers hoping for the peak performances of the Footprints Live quartet may be disappointed but, to paraphrase Miles, on the bandstand, Shorter is a mother. He transcends whatever dubious backing is provided by electric keyboards, bass, guitar and drums (Jim Beard, David Gilmore, Alphonso Johnson, Rodney Holmes, respectively) through the mastery of his technique and the endless ideas that pour out during his solos. By the time of "Over Shadow Hill Way" (a tune not coincidentally revived by the current quartet), Shorter is blowing as hard as ever on soprano, the band doing its best simply to keep up.

While the camerawork and sound of the 1996 show makes this DVD worthy of several viewings, it's the bonus material that makes it a treasure: a 1991 set with Herbie Hancock that features Stanley Clarke playing electric and acoustic bass and a 1992 set, again with Hancock but also Ron Carter and Tony Williams (and Wallace Roney sitting in for Miles) that will send you straight to your Plugged Nickel boxed set.