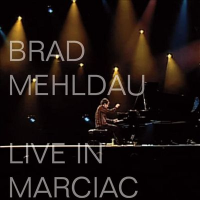 In his 2000 book Fargo Rock City (Scribner), Chuck Klosterman explains a phenomenon in heavy metal that involves the critical threshold at which the speed of notes within a solo actually changes the inherent meaning of the sound. To illustrate his point, he describes a passage by ex-Kiss guitarist Vinnie Vincent that, upon crossing said threshold, "becomes the equivalent of a police whistle." This is an astute observation which extends to jazz as well: There's a point during "Mars," from John Coltrane's Interstellar Space (Impulse!, 1967), where the notes descend so rapidly that it feels less like listening to a sax solo and more like being shot with rays from an intergalactic machine gun. It's a narrow window that occurs after individual pitches shed their singular qualities but before they coalesce into legitimate chords, and it's a rare feat that escapes all but the most virtuosic instrumentalists.

Pianist Brad Mehldau is one of these instrumentalists, and rarely has his gift been displayed as centrifugally as it is on Live in Marciac, a double-shot of solo piano recorded at a French festival in 2006. It's a stunning document that somehow manages to satisfy the most basic melodic appetites while still confounding conventional understanding of human capability. Rock critics have long bemoaned the inverse relationship between melody and pyrotechnic showmanship, and indeed, Mehldau's early records (particularly the live installments of the Art of the Trio series) took their share of heat for consummate musical fireworks that at times disregarded the framework necessary for such tangents to function. But this signals one of the largest components of growth in Mehldau's playing—his heightened awareness of a song's melodic core, even (perhaps especially) in moments of dizzying technical prowess.

ADVERTISEMENT
Comparing Marciac's reading of Cole Porter's "It's Alright With Me" to that which opened 1998's Live At The Village Vanguard; in the earlier recording, Mehldau went back and forth between nimble albeit spastic outbursts—an impressive display of individual ideas seemingly unbound by a shared purpose. But his Marciac performance moves with an agility and mellifluousness elusive to the Vanguard take, gaining a buoyant coherence while sacrificing none of the rhythmic freedom or exploratory dissonance. Most pianists play differently by themselves than they play in groups; Mehldau all but literally transmogrifies his left hand into two other living, breathing band members.

Of course, the Porter-style standard has always been but a third of Mehldau's repertoire, and across Marciac's 100 minutes he packs the rest—the originals and the modern pop tunes—full of the same sensibilities. The flurrying notes erupting in psychedelic unison, the classical lyricism at the heart of all those dreaded Bill Evans comparisons, the moments of technical precision when the piano almost sounds to be playing itself—these are all features whose sum makes Richard Rodgers and Kurt Cobain feel like torchbearers in the same line of tradition. And, in a sense, they are. But who besides Mehldau could make it seem so obvious?