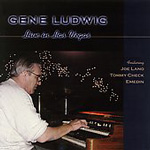 When Hammond B-3 maestro Gene Ludwig performed recently at JALC's tribute to fellow Pittsburgh native Stanley Turrentine, his playing was certainly up to the occasion. Unfortunately, the sound system at the Allen Room wasn't. On certain notes the organ faded out or crackled like poor radio reception. These audio problems might have diminished Ludwig's performance, but they failed to defeat his spirit as he forged ahead through the faulty connection. Live in Las Vegas, recorded at the Blue Note in 2002, shows how vibrant Ludwig can sound when properly amplified.

The leader is tender on the haunting "Flamingo and nimble and spry on his dazzling take on Monk's "Well, You Needn't. Lano's light touch on the bossa nova-infused "Gentle Rain recalls Wes Montgomery; Ludwig keeps the groove going with his delicious tone, and Rivera's percussion spices up the Latin flavor. Ludwig saves his grittiest notes and most wicked right hand sorcery for the up-tempo closer, "I've Found A New Baby.

If the organist lost some notes at JALC, then this disc, ironically, has the inverse problem. Producer Jack Kreisberg brought out the depth and character of Ludwig's playing, but sometimes at the expense of the other musicians. On a few cuts, Lano's guitar and Check's drums sound distant. Moreover, the between-song announcements are really not necessary. Still in all, anyone who was at the Turrentine tribute that hears the excellent Live in Las Vegas will lament what was lost and wish that the sound system at the Allen Room was on par with Ludwig's B-3 mastery.