By WOODROW WILKINS
March 19, 2009
Sign in to view read count 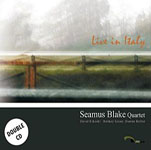 Born in London, England and reared in Vancouver, Canada, saxophonist Seamus Blake has established himself as both a leader and an effective sideman. He brings those leadership skills to the two-disc Live in Italy.

The set opens with "The Jupiter Line," where Kikoski's solo is one of several strong points. Equally involving are Green's rolls on the toms, throwing in some well-timed snare and cymbal strikes. The tenor softly flows in, reinforcing the song's outer-space feel. Throughout, Boller delivers some rapid-fire bass notes.

"Way Out Willy" is a bouncy tune. Electronic effects give the sax a wah-wah sound during an early solo when, at times, it's easy to believe a guitar is involved. Solo is a bit of a misleading term here, because Kikoski, Green and Boller are difficult to overlook, with Kikoski taking over and outdoing himself—a monumental task—as he goes on several journeys while keeping within the theme.

"Spacing" brings out some more of the ensemble's off-world exploration. At times, the song is way out there, but it remains grounded for the most part. Blake's middle solo is one of his more stellar moments as he pushes the tenor to its higher reaches. During one of the softer moments, Green and Boller quietly offer support to Kikoski.

Live in Italy was recorded during a February 2007 tour, capturing highlights of performances in Palermo, Senigallia and Cesenatico. Blake wrote three of the songs, and Kikoski wrote one. Though all nine songs are long, none drag. Each selection has plenty of movement so that there's always a sense of progression rather than repetition.

CD1: The Jupiter Line; Way Out of Willy; String Quartet in G Minor; Fear of Roaming. CD2: The Feeling of Jazz; Spacing; Ladeirinha; Darn That Dream; Dance Me Home.