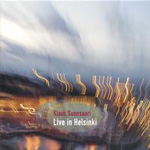 Drummer Klaus Suonsaari is equally at home in the worlds of post bop, mainstream jazz and free jazz, though this live trio performance focuses on the latter. The leader is joined by by saxophonist Scott Robinson (who utilized Suonsaari on all three of his very straight-ahead sessions for Arbors Jazz) and bassist Julian F. Thayer.

The trio's wild improvisations defy predictable paths. Robinson's "One, Two, 1-2-3-4 is a throwback to the late '60s, with the saxophonist on tenor alternately honking and squeaking. The miniature "He Could Stop the World features Robinson's searing soprano sax, fueled by the explosive rhythm section. Thayer's "Bucky Fuller's Bop starts with a repeated motif, though it is quickly abandoned as the trio delves into free-form playing. The relatively subdued "Two Loves provides an unusual finale, with Thayer's final note fading into silence, leaving the listener wanting to hear more of their challenging music.

Folk Song; He Could Stop the World; Yana; Bucky Fuller