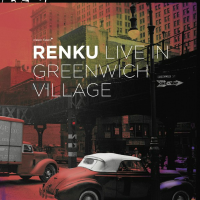 Live In Greenwich Village constitutes the band's third outing in a just over a decade's existence. Culled from two nights at Greenwich House Music School, the program comprises four pieces from the pen of Attias, two from Hébert, one from Takeishi and a cover of a tune by Paul Motian, a mentor for both the reedman and the bassist. An easy give and take characterizes the set, exemplified by the interplay that follows convoluted yet poised lines like "Tapstone" and "Dark Net." Their group sound hints at something larger than the reality, thanks to the way in which Attias' lightly floating intricacies dance with Hébert's grounded yet garrulous counterpoint and Takeishi's busy but tuneful percussion.

Although the route they take may not always be the most obvious, their choices are deliberate and considered, as wonderfully demonstrated by the slowly burning fuse of "Lurch," a spare dirge that forms one of the highlights. At the core lies a call and response between the composer's vocally inflected bow work and Attias' keening alto, abetted by Takeishi's processional drums which both lend a ritual feel and impart an insistent momentum. Hébert renders the drummer's "Soledad" unaccompanied, with a gravitas recalling Charlie Haden, while Attias extends his breezy extrapolations to trade in controlled distortion, especially in the smoldering "70s & 80s Remix" and "Goodbye Rumination" which is more demonstrative than the title might suggest and shapes a fitting conclusion to a tightly worked and engaging set.