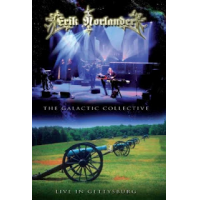 Sheened by immaculate audio engineering processes, the program boasts a crisp and impacting soundstage, as Norlander elevates the Moog back to where it was in the glory days of progressive rock. With wailing anthems, highly melodic tone poems, and ringing vocal parts by Lana Lane and Debrissa McKinney, the band's pulsating rhythmic element and shifting time signatures, equate to a comprehensive musical showcase.

Norlander elicits shades of prog keyboard pioneers Rick Wakeman and Keith Emerson, while offering several majestic segments, augmented by guitarist Freddy DeMarco's mammoth crunch chords and stinging leads. Norlander, putting his engineer hat on, provides specs in the liners about the various synths he uses and helped developed. He also injects a classical element into many of these works, and shifts between harmonious dreamscape modalities and torrid call-response mechanisms with the ensemble.

On The 21-minute "The Dark Water," Norlander steers the musicians through prophetic discourses and elongated synth patterns, nicely counterbalanced with bolero-like rhythmic structures and stately theme-building etudes. His comps are largely designed with harmonious choruses and intensely moving parts. It's not simply a chops-fest, as he embeds copious metrics into the grand schema, including fluent organ riffs and blitzing cadences. With the DVD containing footage of the concert, Norlander dishes out a crème de la crème Moog synth jamboree, spiced with memorable oeuvres and a symmetrical production modeled on power and restraint.