By GLENN ASTARITA
September 12, 2013
Sign in to view read count 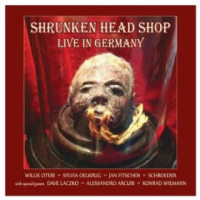 Oteri and his cohorts delve into a scrappy search and conquer mission atop asymmetrical rhythms on "Tracks of the Mystery Ape." Here, Fitschen's brash and expansive fuzz-toned effects help launch matters into a corpulent rock groove as they let the chips fall where they may. During "Wrath of Bernd," Oteri opens the floodgates with his bizarre voicings, spanning discordant theme-building jaunts, tinted with melodic overtones, foreboding lyricism and howling single-note riffs while riding above a perky rock groove. Overall, the upbeat program is framed on the artists' striking intuitiveness, deterministic interplay, and lucidly created electronic dreamscapes.

Legends of the Litfass; Whales of the Black Forest; Celebration of the Tsantsa; Tracks of the Mystery Ape; Wrath of the Bernd.