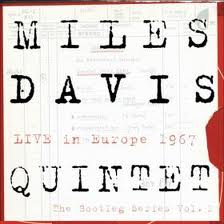 Miles Davis Quintet: Live in Europe 1967: The Bootleg Series Volume 1 compiles an enormous amount of simply incredible music: three CDs and one DVD spanning five European performances that the trumpeter recorded in late 1967 with Wayne Shorter (saxophone), Herbie Hancock (piano), Ron Carter (bass) and Tony Williams (drums)—what was known, even then, as Davis' second great quintet—as part of a "Newport Jazz Festival in Europe" tour produced by George Wein. (Most of the concert footage in Clint Eastwood's acclaimed 1988 documentary Thelonious Monk: Straight, No Chaser comes from this same tour.) The CDs cover concerts in Belgium and Denmark, plus a long Paris show; the DVD presents performances in Germany and Sweden.

Looking back at these 1967 performances through the perspective of Davis' 1971 jazz-rock fusion masterpiece Bitches Brew (Columbia), when the trumpeter completely remade his band and sound, annotator Ashley Kahn writes, "The groundbreaking music of the Miles Davis Quintet at the height of their fourth year together represented the calm before the electric storm."

Every note captures and releases a spirit of mutual freedom and discipline rarely embodied by a jazz quintet. As free as their form and sound may seem, all three versions of "Agitation" (which open the CD concerts) come to rest within one minute of each other. Davis' opening line in the first version (first show) drifts down like a cloud, note by note, with a pliant softness that evaporates like mist from the heat of Shorter's saxophone fire.

Expansive versions of "No Blues" are also featured, and seem to serve as the centerpiece, on every concert CD. Each version sketches a roomy framework full of individual exploration. If Davis and band are playing the blues in "No Blues," they're almost ridiculously abstracted. Williams' solo breaks down, and then reconstructs, the second version, fifteen whirlwind minutes that Williams and Shorter determinedly fill up with crackling, liberating sound.

There's no overstating how essential Tony Williams was to this music. His crashing waves of sound and rhythm absolutely refuse to let the musicians or the music stand still. His solo breaks down the third "No Blues" with bracing rolls, rhythms and counter-rhythms, all played in exacting, concise freedom. Williams simply detonates the aptly-titled "Riot," helps cook "Gingerbread Boy" with relentless rolls, and blows away with hurricane force each version of "Footprints" like they were written in sand. Williams looks so young and casual on the DVD that there's no wondering why some observers speculated that Davis was crazy to hire him.

From these recordings, it sounds like Davis only occasionally featured his ballad playing with this band—the Paris set features "I Fall in Love Too Easily" with his gorgeous solo trumpet introduction—except for their ensemble interpretation of the timeless bebop classic "'Round Midnight," which appears in every set. Davis introduces these with trumpet that captures the magical sound of wonder and regret, its hand held only by Hancock's sympathetic piano. This ballad may be tender, but with Hancock as piano man, it's never soft.

The aural and visual clarity of the concert DVD are exceptional. The audio is so good in "I Fall in Love Too Easily," which reappears in the Germany performance, that you not only hear Davis' opening solo but can actually hear the reverb of his trumpet echoing back at him from the venue walls just a heartbeat later. His melancholy blue sound smolders like hot coals until the rest of the band enters, led by Williams' cymbals, and its heat erupts into an open flame. "'Round Midnight" reappears in the show from Sweden, with Davis' introduction, once more accompanied by Hancock, heart-rending and time-stopping. This show in Sweden also features a strikingly different version of "Agitation," slower and less agitated, with Shorter and Hancock respectively displaying their more gentle and reflective sides. Hancock's solo is some of the most beautiful sounding music in this entire package.