By GLENN ASTARITA
January 8, 2019
Sign in to view read count 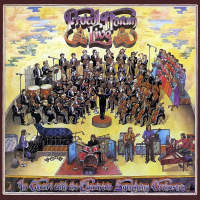 This is an archival release by one of the celebrated prog outfits that is still relatively active, Procol Harum, that is remastered and expanded with bonus tracks, featuring fully restored artwork and liner notes. This 1972 classic stands as a seminal rock meets classical music endeavor, recorded live in Canada.

Procol Harum founder, keyboardist/vocalist Gary Brooker wrote the parts for the Edmonton Symphony and Da Camera Singers for these compositions that are among the band's most notable pieces, emanating from previous studio albums such as A Salty Dog (Regal Zonophone, 1969), the band's debut, Procol Harum (Regal Zonophone, 1967) and others. In addition, this version of "Conquistador" was a released as a single and was a commercial smash, subsequent to their timeless 1967 classic, "A Whiter Shade of Pale."

Guitarist Dave Ball replaced future guitar god Robin Trower in 1971 and performs admirably here, as he assists with highlighting the simmering crescendos with stinging rock guitar leads. And while the band is often classified as a progressive rock unit, they projected broader appeal, and enjoyed extensive radio play. They created dense compositional frameworks built on tiers, and harmonious themes along with blues, Euro-folk and hard-rock inclinations. It wasn't a razzle dazzle type unit that explored space rock or the mega-time changes and extended soloing expositions, evidenced by the likes of groundbreaking prog outfits such as Yes, and Gentle Giant. However, much of their work culminated in detailed song-forms, building upon various genres that meshed into a signature sound and style.

ADVERTISEMENT
Brooker represented the soul of Procol Harum via his unmistakable voice, tinted with regal overtones, melancholic lyricism and a corpulent delivery. He could charm you with a lullaby or breathe fire into a surging musical climax with an authoritative presence. Indeed, one of the great rock vocalists. Nonetheless, the rock element attains a symbiotic relationship with the orchestra, whether it's the Spanish bravado with a charging strings motif on "Conquistador" or the seafaring storylines on "A Whaling Story" and a "A Salty Dog." Here, the orchestra's gentle background treatments and forceful building blocks elevate the core themes and pulses amid staccato phrasings, blaring horns and gripping choruses.

"All This and More" is has an antiquated barrelhouse-like narrative that may ignite impressions of medieval times, complete with pathos, humor and notions of a bunch of dockhands hoisting their ales in merriment. And certain movements provide a storyboard of sorts with grandiose opuses and a sense of the theatric. In addition, there are rehearsal bonus tracks and B-sides. Yet one thing is for certain, the album doesn't sound dated, partially due to the digital uplifts, and the musicians' excellence of execution and communal artistic vision that yielded copious rewards.