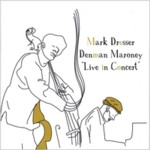 Bassist Mark Dresser is a veteran of Anthony Braxton's quartet and Denman Maroney is the creator of the term "hyperpiano," used to distinguish his approach from that of other pianists using prepared techniques for piano. Those two factors alone say enough about where their music is coming from, which by default arguably places great emphasis on where they take it.

The program they conjure from out of the ether here covers a number of bases without losing either focus or clarity. From the start it's clear that their happily shared vocabulary is an extensive one, and by the time the ninth minute of the lengthy "Starmelodics" roles around the dialog is both intimate and expansive. Maroney's supplements of the piano's traditional sound range encompass not only plenty of work under the lid but also its use as a percussion instrument. Neither of these factors is anything new as such but that doesn't alter the fact that the resulting music is unusual in the degree of its expansiveness. Dresser and Maroney's dialog is emphatically of an order that could be taken up at a moment's notice, and for all of the music's sometimes unworldly air the fact remains that when it coalesces in relatively conventional fashion, as it does at approximately the fifteen minute mark of the same piece, it does so with all the uncontrived but magical logic of musicians thinking as one.

By comparison with what precedes it, the following "Bozcaada" is even more concentrated, and not merely by dint of its relative brevity. The underlying mood of the music is a touch more fractious and indeed less expansive but the passing preoccupation with transcending the limits of conventional tonality makes for something intriguing, especially in view of Dresser's near percussive use of the bow and the presence of sounds not easily attributable to either of the instruments present. Maroney shows how vital the hyperpiano is to his method of expression by the facile way in which he makes a keyboard instrument sound like anything but, but for him that's no end in itself.

The closing "Ediface" perhaps more than anything else here is indicative of music conjured out of nothing despite the fact that Dresser gets the sole composer credit. The silence acts as a third voice insofar as that's plausible as the piece progresses, while Dresser uses relatively conventional bow technique his efforts are undermined by the near stasis of Maroney's contributions.