By JOHN KELMAN
October 7, 2007
Sign in to view read count 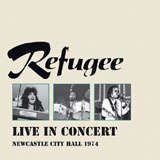 When Keith Emerson left The Nice in 1969 to form Emerson, Lake and Palmer, bassist/vocalist Lee Jackson and drummer Brian Davison were left in a quandary. Both were capable enough, but Emerson was clearly the star of the show. Jackson's subsequent Jackson Heights achieved some cult status, but was hamstrung by average playing and writing—and Jackson's grating voice. So it was a very good thing for Jackson and Davison when they found a new wunderkind in keyboardist Patrick Moraz. With a keyboardist as talented as Emerson, Refugee was formed, and its eponymous debut was released to some acclaim in early 1974 on the Charisma label.

Unfortunately, bad luck and bad timing struck Jackson and Davison again later that year, when Rick Wakeman left the still-ascending Yes. Sure enough, Yes stole Moraz away to record one of its undisputed classics, Relayer (Atlantic, 1974). And so, Refugee sadly became a fond memory rather than a group with the cachet of its peers. Which is a shame, because the recently unearthed Live in Concert 1974, Jackson's irritating singing aside, proves that Refugee was every bit as good as The Nice—better, even, since Emerson's tendency to grandstanding could sometimes be as annoying as Jackson's vocals, and surely contributed to the bloated excesses that ultimately caused ELP to implode after a string of groundbreaking albums in the early 1970s.

Moraz's pseudo-classical "Papillon," stretched out considerably from the studio version, not only finds the keyboardist as fluid as Emerson but, with a greater arsenal of instruments, a more textural player as well. "Grand Canyon Suite" is the highlight of this 65-minute set, demonstrating exactly why Moraz would be such a perfect, albeit sadly short-lived, fit for Yes. It's the kind of epic progressive rock that was de rigueur in the day, moving from complex pseudo-classicism and propulsive rock grooves to majestic balladry, even referencing The Nice's classic "Rondo '69" during Moraz's organ solo near the end of the eighteen-minute piece.

The group revisits a couple of staples from The Nice—a take on Bob Dylan's "She Belongs to Me" and the psychedelic "Diamond Hard Blue Apples of the Moon." In both cases, Moraz's keyboard work is every bit on par with Emerson's and, while he'd never achieve the level of popular acclaim, it's a curious thing that, while both keyboardists continue to work/record today (Moraz enjoyed a stint as keyboardist for The Moody Blues until 1990), neither is considered significant for any work past the 1970s.

The recording quality of Live in Concert 1974, while not exactly pristine, is clear enough, and demonstrates that Refugee live was even better than Refugee in the studio. Had Yes not recruited Moraz it's likely that a group stymied by the very average Jackson and Davison would never have achieved great commercial success, but this unearthed live recording does prove Refugee to be a group that, for Moraz alone, deserves to be remembered.

Outro - Ritt Mickley; One Left Handed Peter Pan; The Diamond Hard Blue Apples of the Moon; Someday; Papillon; She Belongs to Me; Grand Canyon Suite: The Source, Theme for the Canyon, The Journey, Rapids, The Mighty Colorado; Refugee Jam.